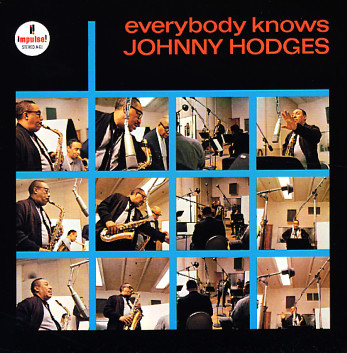 A nice little 60s album by Johnny Hodges – one of the few post-Verve sessions that has him still playing in the hard swinging Ellingtonia small combo mode of the 50s! Players are all strong – and include Jimmy Jones, Cat Anderson, Ray Nance, Harry Carney, and Paul Gonsalves – and the tracks are mostly older numbers, but redone here with a bit more 60s bounce. Hodges' alto is, as ever, great – and titles include "Everybody Knows", "The Jeep Is Jumpin", "Main Stem", "I Let A Song Go Out Of My Heart", and "Open Mike".  © 1996-2022, Dusty Groove, Inc.
(Stereo green label pressing. Cover has a cut corner and light surface wear.)

Today & Now
Impulse, 1962. Very Good+ Gatefold
LP...$59.99
A beautiful record – but that's no surprise, since most of the later work of Coleman Hawkins tends to be great! The setting is quite laidback – and Hawkins' time-weathered tenor is placed in a perfect setting with Tommy Flanagan on piano, Major Holley on bass, and Eddie Locke on drums. ... LP, Vinyl record album