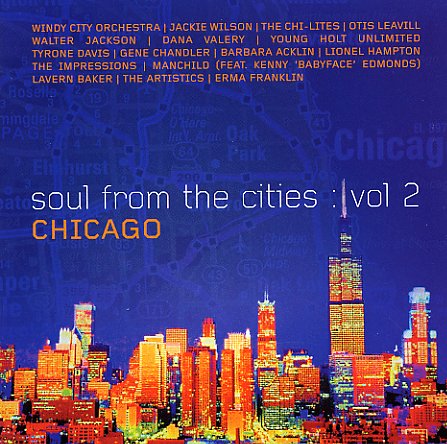 Soul From The Cities Vol 2 – Chicago

A nice little collection of Chicago soul – featuring mostly Carl Davis-produced tracks from the Brunswick and Chi-Sound labels, stretching back to the late 60s, and running up until the end of the 70s. There's a good mix of styles on here – but the work is all strongly linked by Davis' high level of quality in the studio, and by his willingness to keep a nice groove in a track, no matter what the pace. Titles include "There It Is" by Lionel Hampton, "Oh Boy" by Dana Valery, "It's Cool" by Walter Jackson, "Lady Lady Lady" by Barbara Acklin, "Wrapped, Tied, & Tangled" by Lavern Baker, "Especially For You" by Manchild, "Come To My Party" by The Impressions, "The Girl Turned Me On" by Jackie Wilson, "Windy City Theme" by Windy City Orchestra, and "Love Uprising" by Otis Leavill.  © 1996-2023, Dusty Groove, Inc.
(Out of print.)

Troubles, Heartaches, & Sadness
Hi Records/Demon (UK), Late 60s/Early 70s. Used
CD...$8.99
Trouble, heartaches, and sadness – three words that sum up the aesthetic here beautifully – a motherlode of sad-eyed soul from the legendary Hi Records! The tone is certainly blue here, given the topics covered – and the music is wonderful throughout – served up by Hi ... CD

Capitol Gold – The Best Of Minnie Riperton
Capitol, Late 70s. Used
CD...$4.99
An essential collection of work from the legendary Minnie Riperton – a set that was crucial to so many listeners, as during the early years of the CD era, it was the only way you could find any of her music in print! And all these many years later, the set's still a wonderful introduction to ... CD

Back In The Day – The Best Of Bootsy
Warner, Late 70s/Early 80s. Used
CD...$1.99
A funky trip through the classic Warner Brothers recordings of P-Funk maestro Bootsy Collins! The set's a pretty great introduction to Bootsy's work, and includes some of his best numbers, plus a great set of notes that will really help you navigate his rich career. There's a total of 14 tracks, ... CD

Triumph (expanded edition)
Epic, 1980. Used
CD...$3.99 (LP...$11.99)
One of Michael Jackson's last albums with his famous brothers – a record that was cut in between the two Quincy Jones albums (Off The Wall and Thriller) that would catapult him to megastardom! This set is still an all-Jacksons affair – produced and written by the whole group, and put ... CD

Spice Of Life
Cadet, 1969. Used
CD...$6.99
An amazing batch of sophisticated soul tracks – and a favorite with the righteous groove scene! On the surface, the record's a combination of jazz and soul tracks in the same mode that you'd find on some of Nancy Wilson's albums for Capitol during the same time – but digging deeper, ... CD

Best Of War. . . And More
United Artists, 1970s. Used
CD...$1.99
A dozen great tracks from funky Latin soul grooves from LA – most of which forever transformed the sound of funk! All your favorites are here, with 12 tracks in all, including "Slippin Into Darkness", "Cisco Kid", "City Country City", "All Day Music", ... CD

Best Of Ann Peebles – The Hi Records Years
Hi Records/Right Stuff, 1970s. Used
CD...$7.99
Less funk than the title might imply, but still plenty darn great – thanks to a strong helping of work from Ann Peebles legendary years at Hi Records! Back in the 70s, Ann's work for Hi was second only to labelmate Al Green – and like Green, she worked in a similar slow-burning style ... CD