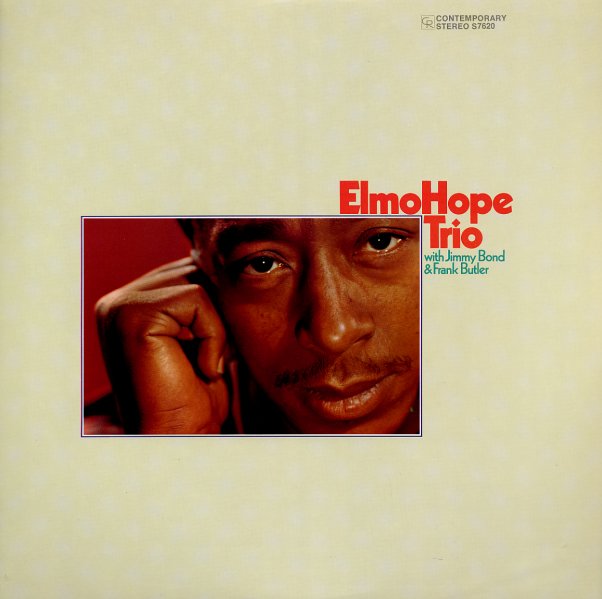 One of Elmo Hope's best trio sessions from the west coast – and a record that really showcases on his skills as a writer as much as a player! The session features 7 original compositions, plus one standard – all done in a complex, modern mode by Hope with a trio that includes the excellent bass player Jimmy Bond, and drummer Frank Butler. Oddly, the session was also one of David Axelrod's first production efforts – not that you can really hear his trademark sound at this point – but it's a nice chapter in his rich legacy! Hope's stellar, as always – and the album's filled with great tracks that include "Barfly", "Boa", "Minor Bertha", "Tranquility", and "Something For Kenny".  © 1996-2023, Dusty Groove, Inc.

World Of Piano
Contemporary, 1961. Sealed
LP...$18.99
Maybe not a "world" of piano, but a real classic from Phineas Newborn – a record that marks a harder, more soulful sound than some of his 50s work – shaking free from some of his flowery touches on the keys, and digging much deeper into the groove of his Memphis roots! The ... LP, Vinyl record album

Way Out West (2LP 180 gram deluxe edition – with bonus tracks)
Contemporary/Craft, 1957. Near Mint- 2LP Box Set
LP...$79.99
A classic set that brings the east coast tenor of Sonny Rollins into contact with a west coast rhythm section of Ray Brown and Shelly Manne! Despite Rollins' silly look on the cover, and the album's overall "western" theme, the session's a brilliant one – right up there with Sonny's ... LP, Vinyl record album

Carl's Blues
Contemporary, 1957. Near Mint-
LP...$34.99
A seminal session of LA hardbop – featuring a great group that includes Gerald Wilson, Jack Sheldon, Harold Land, Frank Butler, and pianist Carl Perkins, the unique talent who had a strange way of playing the keys (sideways!), and who died shortly after the recording of this set. As the ... LP, Vinyl record album

Barney Kessel Plays Carmen
Contemporary, 1958. Very Good+
LP...$19.99
An odd choice for material, but a surprisingly nice record – and just the kind of session needed to break Barney Kessel out of some of his too-familiar trio modes of the 50s! The record here features jazz takes on tunes from the opera Carmen – in case you didn't figure that out from ... LP, Vinyl record album

Harlem Blues
Contemporary, 1969. Very Good+
LP...$13.99
A later issue of material recorded in the late 60s by Phineas for Contempoary – tunes from the sessions for the album Please Send Me Someone To Love, but which didn't make the cut at the time – and are here issued a decade after the original recordings. The group on the set features ... LP, Vinyl record album

Hampton Hawes At The Piano
Contemporary, 1976. Very Good+
LP...$9.99
One of Hampton Hawes' last sessions for Contemporary Records – a wonderful little date that's filled with the bright tones and bold confidence that marked Hamp's piano work in later years! The style here is simple, but effective – and Hawes has a way of ringing out the notes without ... LP, Vinyl record album