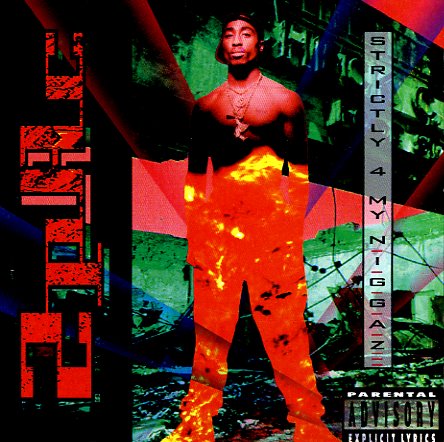 A masterful second album from 2Pac – and a breakout that helped lay the groundwork for his brief but ever rising repuation and legacy! Kicking off with the thumping "Holler If Ya Hear Me" with the frenetic, almost Bomb Squad level wall of sound production by Live Squad that's hammered home all the more with a Chuck D vocal sample in the mix, this record has a huge sound all the way through, much bigger sounding than the debut. Classic! "Keep Ya Head Up", "I Get Around", "Strictly 4 My NI**AZ", "Point The Finga", "Last Wordz", "Souljah's Revenge", "Peep Game", "Strugglin", "Guess Who's Back", "Representin' 93", "The Streetz Are Deathrow", "Papa'z Song" and "5 Deadly Venomz".  © 1996-2021, Dusty Groove, Inc.
(Out of print, BMG music club pressing.)

Low End Theory
Jive, 1991. Used
CD...$7.99 (LP...$34.99)
The second album from the immortal Tribe Called Quest – one of the absolute essential hip hop LPs, and a record that should be an anyone's shortlist of the best albums in several subsections of hip hop – just a straight up masterpiece anyway you cut it. The album is so high up on the ... CD

LAX (2CD deluxe edition)
Geffen, 2008. Used 2CD
CD...$6.99
The third album by The Game – still striving to both modernize and represent the old school of LA gangsta – diversifying the production and the rhymes with a freewheeling selection of guests – including Common, Bilal, Keyshia Cole, Nas, Ice Cube, Lil Wayne and others. Production ... CD