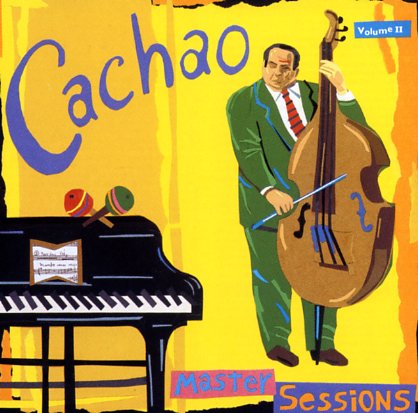 A great return to form for the legendary Cachao – and a session that seeks to recapture the Cuban Jam Session energy of his recordings from a few decades before! Production is by Andy Garcia, and is somewhat more sentimental than in the old days – although certainly still free from any sort of Buena Vista Social Club cliches that would come in later years – and overall, the lineup of players stays nicely faithful to the classic 60s sound, but perhaps expands it with a bit more fullness. Cachao is on bass and a bit of vocals – and other artists include Francisco Aguabella on percussion, Justo Almario on tenor, Chocolate Amenteros on trumpet, Paquito D'Rivera on clarinet, and Nestor Torres on flute. Titles on this second volume include "Los Tres Golpes", "Descarga A", "El Timbalero Travieso", "Africa Suite", "Cunde Echa Un Pie", and "Bemba E Cuchara".  © 1996-2021, Dusty Groove, Inc.

Jam Session With Feeling – Descargas Cubanas
Maype, Early 60s. Used
CD...$8.99
Killer Cuban sounds from Cachao – a set that's definitely done with the "feeling" promised in the title! Jazz is at the core of the set – lots of great instrumental interplay between piano and percussion, tres and trumpet, and bass, of course – guiding the whole thing ... CD

From Havana To New York
Caney (Spain), 1957/1961. Used
CD...$12.99
Classic work from this legendary Cuban bassist – and a great set that captures him on both sides of the cold war! The first batch of 12 tracks is from 1957, recorded in Havana wi the likes of Orestes Lopez, Guillermo Barretto, Tata Guines, and Gustavo Tamayo – and featuring the tracks ... CD

Boogaloos Con El Gran Combo
Gema/Combo, 1967. Used
CD...$18.99
One of our favorite albums ever from El Gran Combo – largely because it's a smoking Latin Soul set! The group were known for a more traditional groove on other records, but here they nicely jump on the younger bandwagon of the time – and step out with a crackling batch of boogaloo ... CD