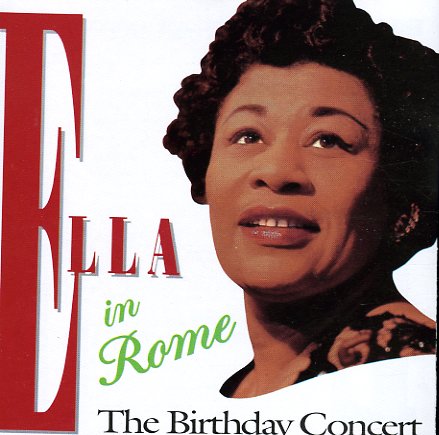 Ella In Rome – The Birthday Concert

Chronological Ella Fitzgerald 1938 to 1939
Classics (France), 1938/1939. Used
CD...$6.99
Includes 23 tracks and features Ella accompanied by Chick Webb and his Orchestra and fronting her own group, the Savoy Eight, which also features Taft Jordan on trumpet! CD

Ella In London
Pablo/OJC, 1974. Used
CD...$2.99
Something groovy always happens to Ella Fitzgerald in London – and in the 60s and 70s, the city became home to some of her best post-Verve recordings! This date's a compelling live performance recorded at Ronnie Scotts in 1974 – with backing by a quartet that includes Tommy Flanagan on ... CD

Ella In London (Japanese paper sleeve edition)
Pablo (Japan), 1974. Used
CD...$19.99
Something groovy always happens to Ella Fitzgerald in London – and in the 60s and 70s, the city became home to some of her best post-Verve recordings! This date's a compelling live performance recorded at Ronnie Scotts in 1974 – with backing by a quartet that includes Tommy Flanagan on ... CD

Lullabies Of Birdland
Decca, Late 40s/Early 50s. Used
CD...$1.99
Seminal pre-Verve work by Ella Fitzgerald – a variety of early singles from the late 40s and early 50s, collected together in one full album by Decca! Even at this point in her career, the Fitzgerald magic is firmly in place – sensitively taking on familiar lyrics on some tunes, ... CD

Intimate Ella (aka Let No Man Write My Epitaph)
Verve, Early 60s. Used
CD...$4.99
A rare session from Ella Fitzgerald – with backing from the trio of pianist Paul Smith, and a nicely intimate vibe! Titles include "Misty", "Black Coffee", "Angel Eyes", "I Cried For You", and "Reach For Tomorrow". CD

My Gentleman Friend
Verve/Universal, 1959. Used
CD...$9.99
A magical exercise in understatement – and one of Blossom's best albums for Verve! The late 50s session features Blossom back in the US and working with a small combo that includes Bobby Jaspar on flute, Ray Brown on bass, Kenny Burrell on guitar, and Ed Thigpen on drums – all grooving ... CD