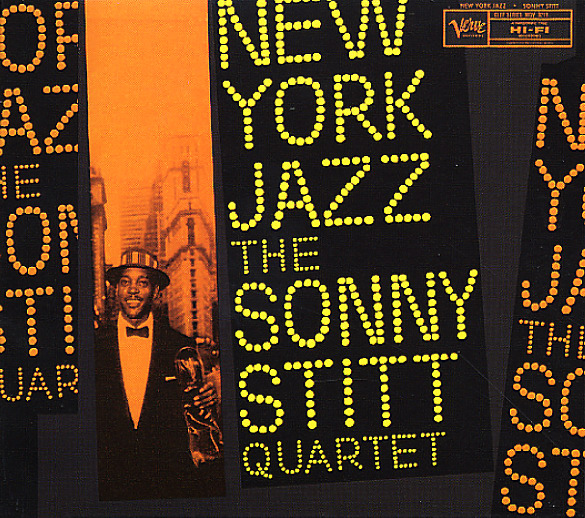 Sonny Stitt's work for Verve was some of his best on record – and this album is a perfect illustration of that bold claim! Sonny's blowing here in a wonderful style – a bit more restrained than on his early bop sides, more complicated than on his later soul jazz sessions, and all together totally solid, totally in-the-pocket – with not a note out of place, nor a moment of superfluous blowing on the set. Stitt's extremely confident here – dominating the intimate quartet setting with lots of fire, warmth, and imagination. The rhythm section includes Jimmy Jones on piano, Jo Jones on drums, and Ray Brown on bass – and tracks include "Sonny's Tune", "Down Home Blues", "Alone Together", and "Norman's Blues".  © 1996-2021, Dusty Groove, Inc.
(Out of print, 2003 digipack pressing with 24-bit mastering.)

Little Bit Of Stitt (with bonus tracks)
Roost/Warner (Japan), 1959. Used
CD...$11.99
A little bit of Stitt is always a great thing – especially when Sonny's playing this well! The album's a killer from Stitt's Roost years – a time when the player was really stepping ahead of the pack – moving past anyone's easy categorizations of his playing – and into ... CD

Tune-Up!
Muse, 1972. Used
CD...$13.99
By this point in his career, Sonny hardly needed a tune up in his style – but the album's a great one from his post-Prestige years, and a real back-to-basics effort that recalls the genius of his work on Roost! The format is straight and simple – Stitt's tenor and alto fronting a ... CD

Pow!
Prestige/Roulette, 1966. Used
CD...$16.99
Pow is right – as Stitt grooves with a tight combo that features Benny Green on trombone, Kirk Lightsey on piano, Herman Wright on bass, and Roy Brooks on drums. The album's one of a few sides produced in the mid 60s by Richard Carpenter, a jazz manager/impresario who cut Chet Baker on some ... CD

Just In Case You Forgot How Bad He Really Was (32 Jazz pressing)
32 Jazz, 1981. Used
CD...$5.99
A smoking little bop set from Sonny Stitt – recorded live at the Keystone in 1981, as sort of a "summit meeting" of horns – one that features Richie Cole and John Handy in the frontline with Sonny! The rhythm section alone is enough to cook this one up nicely – with ... CD