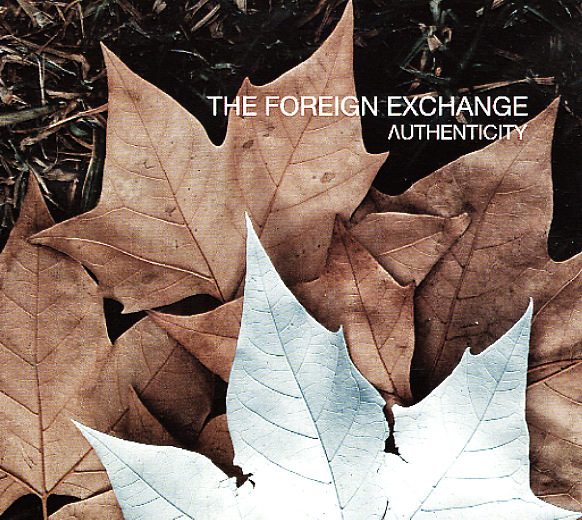 Spacey hip hop soul gurus Phonte & Nicolay return as Foreign Exchange – taking to the cosmos with a genuine depth of soul on Authenticity – possibly their best yet, and another great record! Vocalist Phonte continues on one of the most unpredictable career trajectories in contemporary music, from southern rapper in Little Brother to emotional soul storyteller in FE – the honesty and integrity of his vocals paired masterfully with Nicolay's production. He has a way of taking keyboard inflected soul beats and inflecting them with spacier flourishes – brilliantly enhancing the soulfulness rather than glossing it up. The creative team has been a part of fantastic records by Yahzarah, Zo! and others recently, both of whom return the favor with guest appearances here – along with Darien Brockington, Chantae Cann, Median & Jesse Boykins III. Includes "The Last Fall", "Authenticity", "Eyes To The Sky", "All Roads", "Fight For Life", "Maybe She'll Dream Of Me", "Make Me A Fool", "Everything Must Go", "Laughing At Your Plans" and "This City Ain't The Same Without You".  © 1996-2020, Dusty Groove, Inc.

Dirty Computer
Bad Boy, 2018. Used
CD...$6.99
Janelle Monae knocks it out of the park here – sounding every bit as great as before, but also hitting this righteous mode that really takes the singer to incredible new territory! If you loved Janelle's previous records, don't worry – she's still as catchy and playful as ever – ... CD

Moet Meets Bluey
Pony Canyon (Japan), 2003. Used
CD...$11.99
Japanese singer Moet meets up with Jean-Paul "Bluey" Maunick of Incognito – and the result is a jazzy set of tunes that crackle with the Incognito touch! The album's got a mix of English and Japanese lyrics, and backings done in that blend of classic jazz and soul that first made ... CD

Live At The Soul Kitchen, Gothenburg
P-Vine (Japan), 2015. Used
CD...$22.99 (CD...$26.99)
A great little live set from Brand New Heavies – the kind of record that reminds us that, even after the space of 25 years, these guys are still one of the best funky soul groups on the planet! The set's an unusual one, in that N'Dea Davenport makes a surprise return to the lead with the ... CD

Mall Of Fortune
Innovative Leisure, 2019. Used
CD...$5.99 (LP...$14.99)
A really great second set from Harriet Brown – one of those "recorded at home" soul records that may well set the tone for a generation to come! Brown's got this always-skittish, almost-nervous approach to his music – one that often echoes the lyrics of the tunes, and their ... CD

Only A Man
Confunktion (UK), 2018. Used
CD...$6.99 (LP...$19.99)
Mr Confuse has always been one of the best blue-eyed soul singers on the overseas funk scene – able to hit the right sort of modes for the music, yet never push things so much that he's trying to sound fake – a careful blend that might make others want to take note! Backings are tight ... CD

Garner Poems
Electric Cowbell, 2018. Used
CD...$4.99
A fantastically righteous set – a blend of funk and politics that we haven't heard done this well since the 70s – even though the whole record is aimed at dealing with contemporary issues – as you might guess from the title's reference to the late Eric Garner! The set's dedicated ... CD

Cellar Funk
Narada, 2004. Used
CD...$6.99
The Down To The Bone posse are at it again – coming up with some incredibly sweet jazzy grooves – and somehow sounding even better than before! The album's got the group's characteristic bounce firmly in place – the groove that made them a surprise global success nearly a decade ... CD