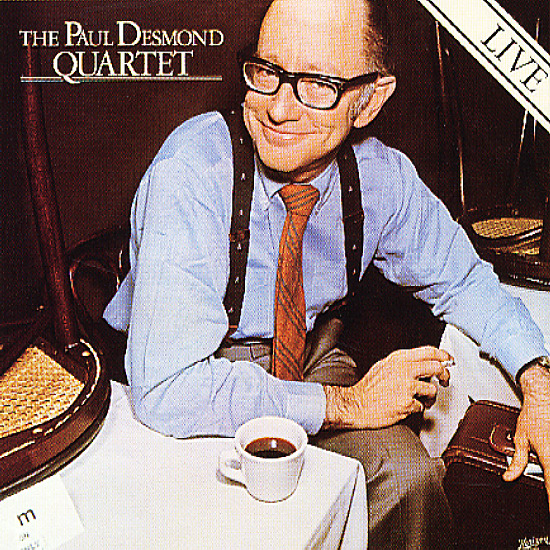 One of our favorite Paul Desmond records of all time – a set of understated brilliance that really lets him display his genius! Desmond at this time had been lost in some other sets that respected his talents, but didn't offer the greatest proof that he'd been growing as an artist – and this live album presents his magical alto work in a totally unfettered setting, with just guitar, bass, and drums backing him up. The spare sound is simply sublime – as Desmond's alto floats in air, magically picking notes out of nowhere, and illuminating the empty space with notes that seem to fall from the heavens. Titles include "Manha De Carnaval", "Here's That Rainy Day", "Wave", "Wendy", and "Take Five" – all done in nice long takes! CD also includes the previously unissued bonus track "Line For Lyons".  © 1996-2022, Dusty Groove, Inc.
(2000 pressing – with bonus track!)

Pure Desmond (remastered edition – with bonus tracks)
CTI, 1974. Used Gatefold
CD...$5.99 (LP...$29.99)
An album of sublime understatement from alto genius Paul Desmond! Desmond was one of the few players who resisted the lure of the 70s electric CTI sound – and stuck pretty much in his usual bag of easy-going grooves, blowing alto with effortless ease, working here with a quartet that ... CD

First Place Again (Japanese pressing)
Warner (Japan), 1960. Used
CD...$14.99
The first big Paul Desmond solo album of the 60s – and a standout set that's very much in the tradition of his best work on RCA! This rare side was cut for Warner Brothers during a time when they were taking a brief dip into jazz – and it's a rarely-heard set that features Jim Hall on ... CD