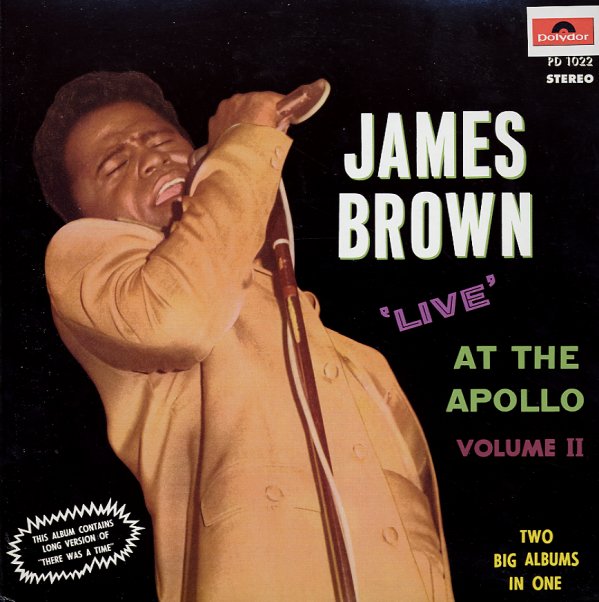 Live At The Apollo Volume II

James Brown's great second album recorded live at the Apollo Theater in Harlem – a set we like even better than the first famous volume – because it's much more stretched-out, harder-hitting, and full of fire! You'd be hard pressed to find a better example of Brown's showmanship on record – as James urges the band through these triple-time takes on some of his classics, and turns in some amazing work in the process! The set includes a killer long version of "There Was A Time" – almost the blueprint of the James Brown funk sound to come – and other titles include "Bring It Up", "Let Yourself Go", and a wonderful duet version of "Think" – plus "Prisoner Of Love", "Out Of Sight", "Try Me", "It's A Man's, Man's, Man's World", "Lost Someone","Thanks", "Cold Sweat", "I Feel Alright", and "Please, Please, Please".  © 1996-2021, Dusty Groove, Inc.
(Out of print.)

Out Of Sight
Smash/Polygram, 1964. Used
CD...$24.99
One of the stranger James Brown albums from the 60s! The record is one of the only vocal albums he cut for the Smash label – and it was issued during a time when James was strangely contracted to two labels – King and Smash. His dual contract situation was that he couldn't record any ... CD

Something Special (UK pressing)
De-Lite/Universal (UK), 1981. Used
CD...$7.99 (CD...$13.99)
Something Special indeed – as the album was one of the biggest hits for Kool & The Gang, and showed that the group still had plenty of energy left to groove into the 80s! The record features production work by Brazilian music maestro Eumir Deodato – who by this point had become a ... CD