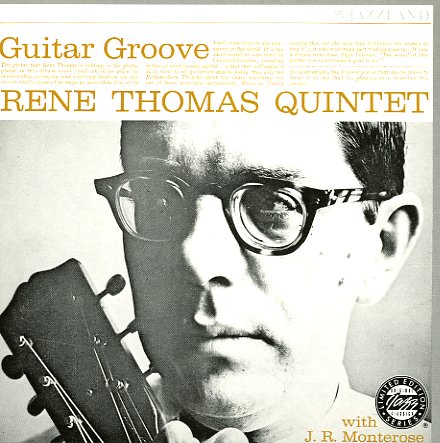 Belgian guitarist Rene Thomas was one of the few players to break out of the postwar Paris jazz scene and actually get to record in America – and on this classic set from 1960, he's grooving with a very hip group that includes JR Monterose on tenor, Hod O'Brien on piano, and the rhythm section of Teddy Kotick and Albert Heath. Tracks are all in the 5 minute range – save for one longer reading of Monterose's great "Green Street Scene" – and the material is pretty nice and breezy. Titles include "MTC", "Spontaneous Effort", and "Milestones".  © 1996-2021, Dusty Groove, Inc.
(Out of print.)

Solar
Jazzland/OJC, 1962. Used
CD...$11.99
An obscure little quartet session from Red Garland – recorded with Les Spann on both guitar and flute, caught at a time when he was just starting to make waves on the New York scene! The presence of Spann gives the record a decidedly different feel than most of Garland's work on Prestige ... CD

IE
Jazzland (Norway), 2016. Used
CD...$12.99
One of the most dynamic records we've ever heard from Eivind Aarset – a set that's got all the offbeat electronics of his other albums, but which sometimes comes across with a lot more drive and direct power overall! Some points almost have a full-on fusion feel – with drums that ... CD