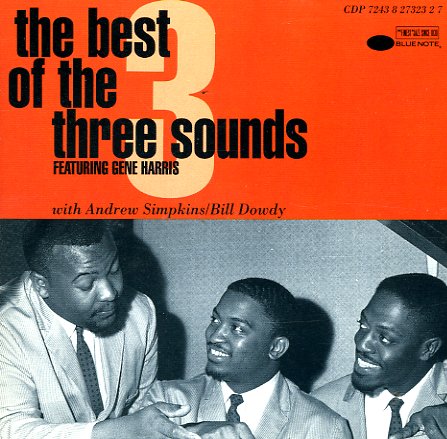 Best Of The Three Sounds

Standards
Blue Note, 1959/1962. Used
CD...$11.99
Previously unissued work by the Three Sounds – tracks recorded at sessions from 1959 and 1962, but issued here for the first time! As in keeping with Blue Note's Standards series, the material features Gene Harris and trio performing well known tunes of the 20th Century – but given ... CD

Moanin' (RVG remastered edition – with bonus track)
Blue Note, 1958. Used
CD...$6.99 (CD...$5.99, CD)
One of Art Blakey's first true moments of genius! This transitional version of the Jazz Messengers included two parts – Lee Morgan and Bobby Timmons – of the holy Morgan/Shorter/Timmons trilogy, and it's also got the added bonus of Benny Golson on tenor, who was at the height of his ... CD

Moanin' (Non-RVG edition)
Blue Note, 1958. Used
CD...$5.99 (CD...$6.99, CD)
One of Art Blakey's first true moments of genius! This transitional version of the Jazz Messengers included two parts – Lee Morgan and Bobby Timmons – of the holy Morgan/Shorter/Timmons trilogy, and it's also got the added bonus of Benny Golson on tenor, who was at the height of his ... CD