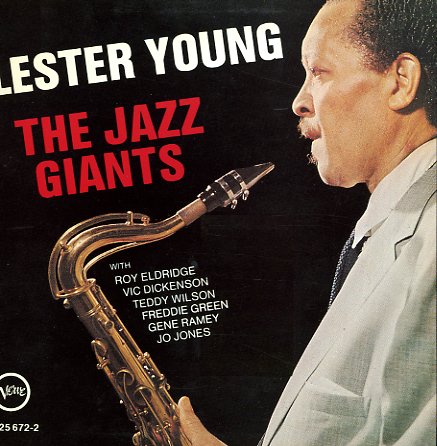 A beautiful session from the mid 50s, and on that's very much in the classic imprint of the Verve label. Norman Granz pulls together some of the bigger post-swing players of the day – like Young, Eldridge, Freddie Green, Jo Jones, Teddy Wilson, and others – and has them run through beautifully mellow versions of standards like "I Guess I'll Have To Change My Plan", "This Year's Kisses", "You Can Depend On Me", and "I Didn't Know What Time It Was". Nice and open-ended!  © 1996-2022, Dusty Groove, Inc.
(Out of print.)

Pres & Teddy (with bonus track)
Verve, 1956. Used
CD...$1.99
A classic session of mellow magic from tenorist Lester Young and pianist Teddy Wilson – both giants of jazz from an earlier generation, but maybe sounding even better here in a sublime Verve Records setting from the 50s! Young's tenor fronts the trio of Wilson – with Gene Ramey on bass ... CD

President Plays With The Oscar Peterson Trio (plus bonus tracks)
Verve, 1952. Used
CD...$2.99 4.99
Lester Young joins the Oscar Peterson trio – and the result is a classic meeting of the minds from early 50s Verve! Young's tone is tremendous throughout – that sharp-yet-cool style that had such a big influence on other 50s players, and which gets some great support here from Peterson' ... CD