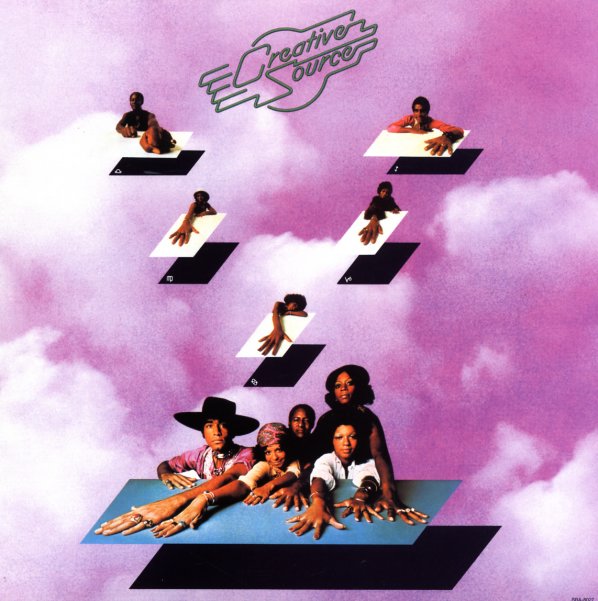 The massive first album from Creative Source – a really unique group who really helped push the ensemble vocal mode forward in the 70s! The mixed male/female lineup recalls similar groups of the late 60s – but Creative Source also have a deeper, hipper style that comes through right away – a good ear for jazz in their phrasing, and an ability to get past any of the hoke of more sing-song gal/guy groups. The tunes are very progressive, and the album features sublime arrangements from Skip Scarborough – who's working here in a wonderful realization of the style he'd work later for so many other artists. The group does a classic rendition of Scarborough's "You Can't Hide Love", which was a hit for Earth Wind & Fire, plus nice covers of two tracks by Sussex labelmate Bill Withers – "Who Is He & What Is He To You" and "Let Me In Your Life". Also includes the group's own "Oh Love", which is a nice groover – plus "Magic Carpet Ride", "Wildflower", and "Lovesville".  © 1996-2023, Dusty Groove, Inc.
(Cover has some light wear, name in pen on the cover & labels.)

Just As I Am
Sussex, 1971. Very Good
LP...$39.99
A beautiful album by Bill Withers – filled with incredibly well written songs, and an amazing instrumental technique that blended folksy elements with smoother 70s soul, in a sound that would put Bill at the top of the charts for many years, yet still give him cred with soul fans for decades! ... LP, Vinyl record album

Justments
Sussex, 1974. Near Mint-
LP...$39.99
A massive 70s album from the great Bill Withers – one that's sometimes overlooked next to his huge crossover records that preceded it – but which is every bit as wonderful! Withers is still on Sussex Records, and still has that completely unique approach that made him a soul genre unto ... LP, Vinyl record album

Electric Coffey
Sussex, 1972. Near Mint-
LP...$34.99 (CD...$19.99)
Mad funk from Dennis Coffey – and the follow-up to his landmark Evolution album! It's interesting to note that Coffey's group is listed as the "Detroit Guitar Band" – which kind of foregrounds their link between the city's two strongest music sides of the late 60s: the hard ... LP, Vinyl record album