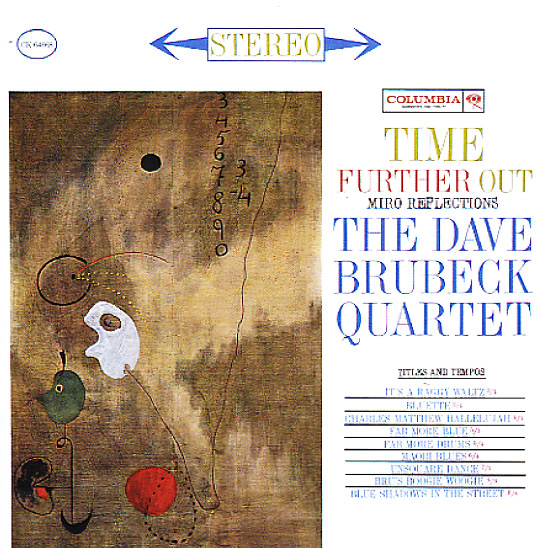 Time Further Out (with bonus tracks)

Like Dave Brubeck's legendary Time Out set? Try this one – a great record that takes off from the concept of the first, but which goes in some very fresh new directions – using the same great group with Paul Desmond on alto, Eugene Wright on bass, and Joe Morello on drums! Dave's still working out some nutty time signatures here – but apart from the science, the thing that really makes the record cook is Desmond's alto – icy, edgey, floating, and always a treat – almost even more amazing in the space of some of these offbeat numbers. Titles include "Maori Blues", "Far More Drums", "Bluetee", "Far More Blue", and "It's A Raggy Waltz". CD features 2 bonus tracks "Slow & Easy" and "It's A Raggy Waltz (live at Carnegie Hall)".  © 1996-2021, Dusty Groove, Inc.
(Remastered version with 2 bonus tracks.)

Time Out (2CD Legacy edition – with previously unreleased live tracks)
Columbia, 1959. Used 2 CDs
CD...$8.99 (LP...$29.99, CD...$2.99, CD...$1.99)
Easily the crowning moment of genius for the legendary Dave Brubeck Quartet – the moment when all things came together magically, and the group somehow elevated themselves to a whole new level in jazz! At the time of the set, Brubeck, Paul Desmond, and the rest had already been making plenty ... CD

Jazz At Oberlin (hybrid SACD pressing)
Fantasy, 1953. Used
CD...$29.99 (CD...$3.99)
A classic album from Dave – recorded at Oberlin College, the mid-Ohio haven of bohemiana, and a growing hotbed of jazz activity centered around students in the college's conservatory of music. Dave and crew made the trip at the request of the kids – breaking from their mostly San ... CD

Plays & Plays & Plays (with bonus track)
Fantasy/OJC, 1957. Used
CD...$5.99
Dave Brubeck plays and plays and plays – but not in the repetitive way you'd guess from the title, given that this solo album is easily one of his most inventive from the Fantasy years! Solo styles aren't usually what we'd expect from Brubeck at this point, but Dave handles them very well ... CD

Jazz – Red Hot & Cool (plus bonus tracks)
Columbia, 1955. Used
CD...$5.99 (LP...$8.99)
A sweet live set from Dave Brubeck's early years on Columbia Records – recorded in New York, but with all the calculated cool and modern tones Brubeck first forged in the San Francisco scene of the 50s! Paul Desmond's on board on alto sax – really getting a lot of space to stretch out ... CD

Dave Brubeck Octet
Fantasy/OJC, Late 40s/Early 50s. Used
CD...$6.99
A full LP that combines early work by Dave Brubeck – pulled together from a few 10" LPs, and packaged in a nice cartoony cover. The record features the work of his octet – a group that gives a rare opportunity to hear Brubeck in a large group setting, and one that also features ... CD