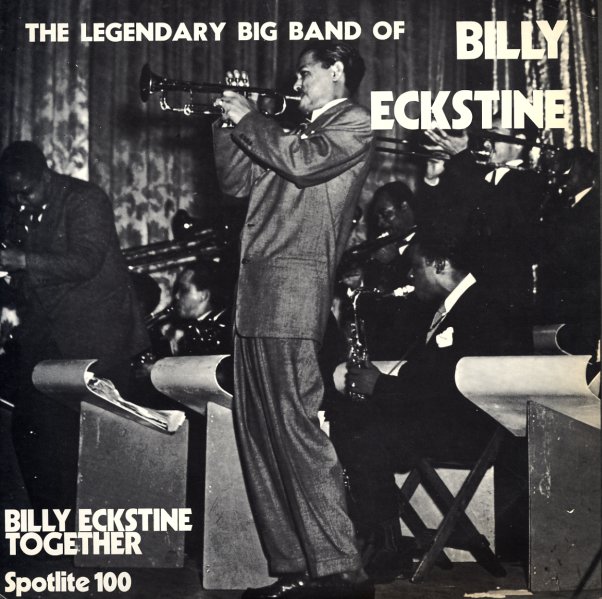 Together – The Legendary Big Band Of Billy Eckstine

Great work from the early years from Billy Eckstine – including one track with Billy on trumpet! Band members include Fats Navarro on trumpet, Gene Ammons and Budd Johnson on tenors, Leo Parker on baritone, and Art Blakey on drums! The set also features some vocals from Lena Horne and Sarah Vaughan too!  © 1996-2022, Dusty Groove, Inc.
(Early 70s issue.)

Mister B & The Band – Savoy Sessions
Savoy, 1945/1946. Near Mint- 2LP Gatefold
LP...$2.99
Amazing work from the early, legendary years of Billy Eckstine – that time when he was fronting one of the hippest backing groups a vocalist could hope to have! Eckstine's voice was already becoming the stuff of legend by the time of these recordings – but thanks to contributions from ... LP, Vinyl record album

You Call It Madness!
Regent, Late 40s. Near Mint-
LP...$14.99
Sublime work from Mr B – a collection of his earlier Savoy singles, assembled for a wonderful 50s album on the Regent label – and featuring some of the best jazz-based work in the classic Eckstine mode! As is well known, Billy's group of the time featured nothing but top-shelf jazz ... LP, Vinyl record album

Prime Of My Life
Motown, 1965. Near Mint-
LP...$9.99
A lost bit of work from Billy, and a suprisingly nice album that sets the stage for a host of more sophisticated male singers to come! The record features Billy with lush arrangements by Melba Liston, Gil Askey, and Bobby Tucker – singing in a deep and sensuous style that's similar to that ... LP, Vinyl record album