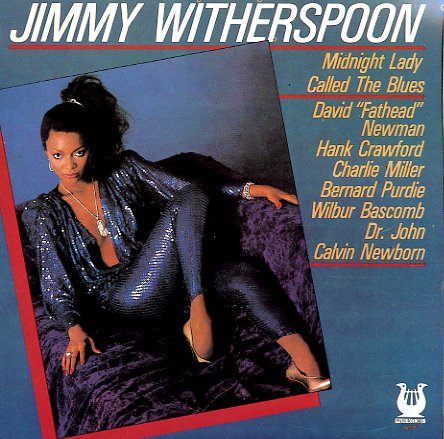 Jimmy Witherspoon sings with some great help here – including David Fathead Newman on tenor, Hank Crawford on alto, Dr John on piano, Calvin Newborn on guitar, Wilbur Bascomb on bass, and Bernard Purdie on drums. Dr John did the arrangements too!  © 1996-2023, Dusty Groove, Inc.
(Out of print.)

Star Eyes
Muse, 1993. Used
CD...$6.99
Always-great work from singer Lorez Alexandria – still sounding wonderful, even at this late date! Her presentation's a bit earthier than before, but no less poised than on earlier sessions – with the same sense of space and timing that's always made her one of our favorite jazz ... CD

Voices In Latin/Freshman Year
Capitol/Collectors Choice, Late 50s. Used
CD...$6.99
Fantastic material from one of the grooviest vocal groups of all time! The Four Freshmen are longtime faves here at Dusty Groove – and this cool 2-in-1 CD brings together two of the rarest albums by the group. Voices In Latin contains some great Kenton-esque Latin arrangements by Pete ... CD

My Way
Reprise, 1969. Used
CD...$3.99
A standout late 60s set from ol' blue eyes – and a record that gave him one of the last great songs of his career! The title cut's a well-known gem, but the whole thing's pretty sweet – arranged and conducted by Don Costa, and done in that maturing masculine mode Sinatra was hitting at ... CD

It Might As Well Be Swing
Reprise, Early 60s. Used
CD...$3.99
One of Sinatra's greatest records ever – pure genius all the way through! Frank's backed here by the orchestra of Count Basie, with some incredible arrangements by Quincy Jones that really have a jazzy, syncopated kick to them. The move seems to be an unintentional way of covering for Frank' ... CD