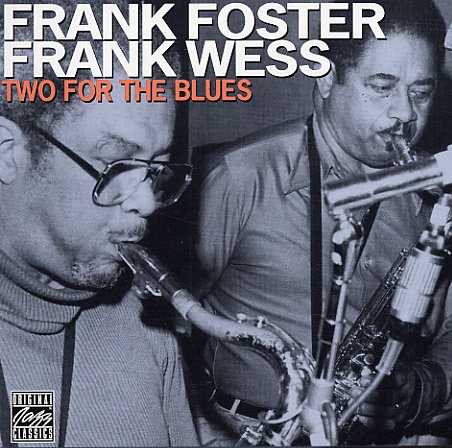 Two For The Blues

A wonderful reunion of the team of Frank Foster and Frank Wess – caught here in an easy-going and laidback style that's miles away from their work with Count Basie! The youthful rhythm section of Kenny Barron, Rufus Reid, and Marvin Smitty Smith really adds a lot to the set – giving the record a later sort of soul jazz vibe, one that's perfect for the pair to solo over in open-ended lines. Both Franks play tenor sax, and Wess plays flute and alto as well – while Foster does some excellent work on soprano sax. Titles include "Bay Street", "Two For The Blues", "But For The Likes Of You", "Nancy With The Laughing Face", "Your Beauty Is A Song Of Love", and "A Time For Love".  © 1996-2021, Dusty Groove, Inc.
(Out of print, BMG music club pressing.)

Blow Arnett, Blow
Prestige/OJC, 1959. Used
CD...$11.99
Blow Arnette does, at that – a killer tenor groove that's augmented here by some additional work from Eddie Lockjaw Davis! The pair really let loose on some of the tunes here – blowing in that older "battle" mode at points, but also laying back at times too – hitting a ... CD

After Hours
Esoteric/OJC, Early 40s. Used
CD...$8.99
The roots of bebop! During the early 40s, sets held in Harlem nightclubs, especially the famous Minton's, were seminal to the development of bebop – and you'll hear exactly what we mean on this long overdue CD reissue. The set features material recorded by Jerry Newman at Minton's and ... CD

Swingin' The 20s
Contemporary/OJC, 1958. Used
CD...$6.99
Benny Carter swings material from the 20s – but the results are a lot better than you might expect! We'll be honest in saying that the cover and theme of this one always made us figure the record was some sort of "old timey" affair – but Benny's surprisingly cool on the ... CD