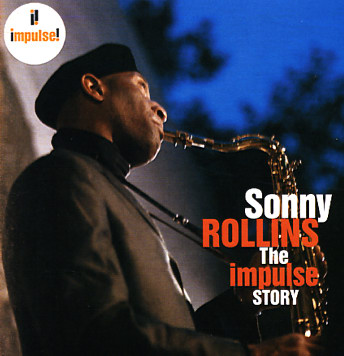 Some of the most compelling work that Sonny Rollins recorded in the 60s – served up here in a helping of his 3 albums for Impulse Records! Rollins only stopped at the label briefly – and didn't contribute as much to the Impulse catalog as other 60s tenor heavyweights like John Coltrane or Archie Shepp – but each of his 3 records for the company are real gems, and the best tracks from those sides are presented nicely in this introductory package! Titles include straighter numbers like "Three Little Words" and "On Green Dolphin Street"; soaring large group material with Oliver Nelson on the tracks "On Impulse", "Street Runner With Child" and "Alfie's Theme"; and nicely open-ended blowing on the 20 minute long "East Broadway Run Down", an extremely influential title from the time!  © 1996-2021, Dusty Groove, Inc.
(Out of print.)

Sonny Rollins With The Modern Jazz Quartet
Prestige/OJC/ZYX (Germany), 1951/1953. Used
CD...$6.99
Early Sonny Rollins work for Prestige – recorded in the years 1951 and 1953, in a variety of settings! 4 tracks on the album features Rollins blowing with the MJQ, one more has him working with a Miles Davis group, and the last 8 feature a quartet with Kenny Drew, Percy Heath, and Art Blakey. ... CD

Worktime!
Prestige, 1955. Used
CD...$4.99
If worktime was like this for us, you'd catch us showing up on the job early every day – but sadly, nothing at our office can match the brilliance of early Sonny Rollins here – a sharp-edged genius that perfectly illustrates why he was one of the greatest players on his horn for many ... CD