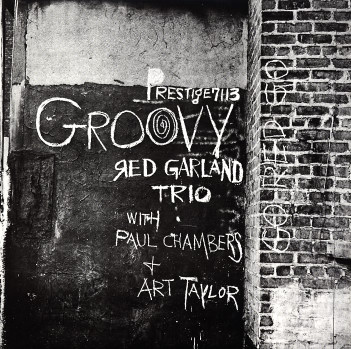 Also available
Red Garland — Groovy ... CD 4.99
Long tracks and plenty of room to move around – a perfect setting for the classic sound of the Red Garland Trio on Prestige! Despite the title, the album's not so much groovy as it is lyrically beautiful and filled with sensitivity – a key bridge between piano players of the mainstream in the years before Garland, and some of the bigger, bolder names that would rise up during the 60s soul jazz years. Rhythm is by Paul Chambers on bass and Art Taylor on drums – and the longer tracks give Chambers plenty of room to express his unique talents on the bass. Titles include "Gone Again", "Hey Now", "Will You Still Be Mine", "What Can I Say Dear", and "C-Jam Blues".  © 1996-2022, Dusty Groove, Inc.
(CD case has a cutout mark.)