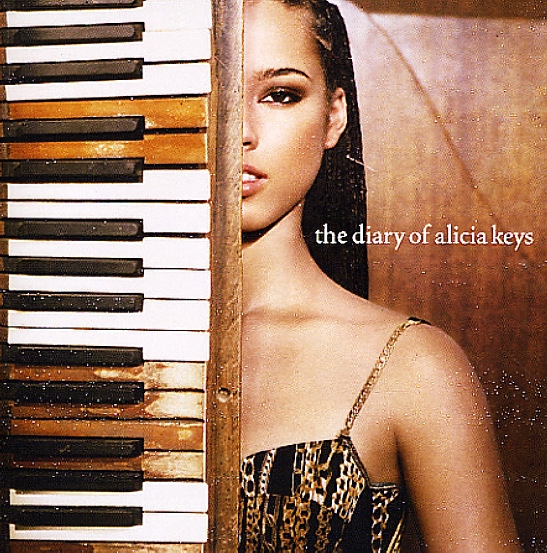 Also available
Alicia Keys — Diary Of Alica Keys (with bonus DVD) ... CD 1.99
Don't write Alicia Keys off simply because she's a pop princess! This second album might sit at the top of the charts for six months, or it may falter quickly and be seen a "sophmore slump" – but whether you see clips on Access Hollywood or not, this Diary is pretty nice to our ears! Diary Of Alicia Keys finds the piano playing, jaw-droppingly beautiful chanteuse rocking a more outwardly hip hop feel on the best tracks, particularly the probable singles "You Don't Know My Name" (with production by Chicago's favorite son Kayne West) and "Heartburn" (with Timbaland on the beats). But the girl is by no means simply a typical prefab Clive Davis hitmaker – she wrote or co-wrote most of the music here, and she's the top billed producer on most of it, too. Alicia isn't re-inventing the wheel here, and her lyrics aren't the most deeply-thoughtful introspection you'll find out there (especially for an album with the word "diary" in the title), but there's no denying the soul, or the endearing catchiness of the hooks & beats! Other tracks include "Karma", "If I Ain't Got You", "When You Really Love Someone", "Diary" (with Toni!Tony!Tone!), "Slow Down" and more.  © 1996-2023, Dusty Groove, Inc.

Diary Of Alica Keys (with bonus DVD)
J Records, 2003. Used CD & DVD
CD...$1.99
Don't write Alicia Keys off simply because she's a pop princess! This second album might sit at the top of the charts for six months, or it may falter quickly and be seen a "sophmore slump" – but whether you see clips on Access Hollywood or not, this Diary is pretty nice to our ... CD

Cee-Lo Green Is Thomas Callaway
Easy Eye Sound/BMG, 2020. Used Gatefold
CD...$9.99
A fantastic new chapter in the career of Cee-Lo Green – reemerging here as an old school southern soul singer, with a vibe that's in the best legacy of Al Green and some of the underground talents of his generation! The set was recorded in Nashville, produced by Dan Auerbach, and has a ... CD

Love Reigns
Queen Aaminah, 2003. Used
CD...$5.99
An amazing soul singer with a sweet jazzy touch – and the debut release from Queen AaMinah, a talent who knocked us for a loop from the very first note! The album's a wonderfully fresh self-produced effort – filled with original tunes written and arranged by Queen, sung in a style that ... CD

Aijuswannaseing
Def Soul, 2000. Used
CD...$1.99
Classic-styled soul from Musiq Soulchild – his debut set for Def Soul, and the start of a great run of mellow grooves! As you might guess from the compressed wording of the title, the tunes here have a great set of flow – a laidback, kicked-back sort of sound that's not nearly as full-o ... CD

Walk Alone
Indie Blu, 2010. Used
CD...$6.99
PJ Morton really delivers on the promise of his previous albums – and here, he's matured into the kind of a soul artist we might describe as a 21st Century Bill Withers – deeply soulful, with an acoustic vibe at points, but enough focus and polish to also win over a more traditional ... CD

Soulacoaster
Digisoul (UK), 2009. Used
CD...$16.99
Soulful music from Soulpersona – a warm and just smooth enough ride on the Soulacoaster! Soulpersona is the producer, arranger and instrumentalist behind the curtain – a genuine talent who has attracted an impressive roster of singers and collaborators for this set – including ... CD

Bold & Beautiful
BBE (UK), 2006. Used
CD...$6.99
A great title for an equally great little record – one that marks a whole new stage of genius for Philly soul maestro Vikter Duplaix! Vikter's been making our world plenty brighter with his music for a number of years, but with this record he earns our respect even more – by smoothing ... CD

Violet Flower
Meta Music, 2006. Used
CD...$3.99
A really wonderful set from Yolanda Johnson – the daughter of 70s mellow soul genius Samuel Jonathan Johnson, but a heck of a great artist in her own right! Yolanda's definitely inherited some of her father's talent for a laidback groove – and this album's a masterpiece in understated ... CD