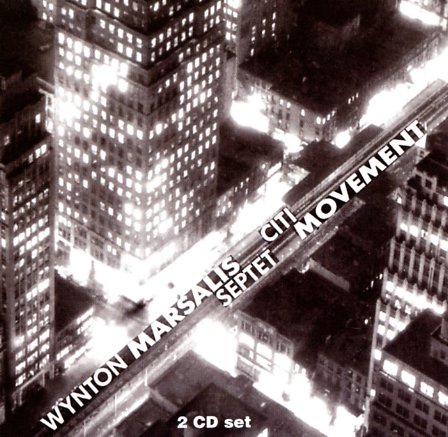 A nice little take on the "city symphony" mode that was big in American music a few decades back – served up by the Wynton Marsalis Septet of the early 90s, with decidedly modern touches! The double-length album's a three-tiered affair – with part one standing out as Wynton's extended "Cityscape" – a tribute to New York, done in styles that range from mellow and contemplative, to more hustling and bustling, in true speed of the city. Next up is another suite of tracks titled "Transatlantic Echoes" – work that's still jazz-based, but with a nod to African roots in some of the percussion and phrasing. Last up is "Some Present Moments Of The Future" – the final suite of the album, and one that almost echoes some of the rootsier modes explored by Wynton in his southern trilogy of a few years before. Players include Wynton on trumpet, Todd Williams on tenor and soprano sax, Wes Anderson on alto, Wycliffe Gordon on trombone, Reginald Veal on bass, Herlin Riley on drums, and Eric Reed on piano – and the album also features some guest tenor from Herb Harris and a bit of piano by Marthaniel Roberts.  © 1996-2021, Dusty Groove, Inc.
(Out of print.)