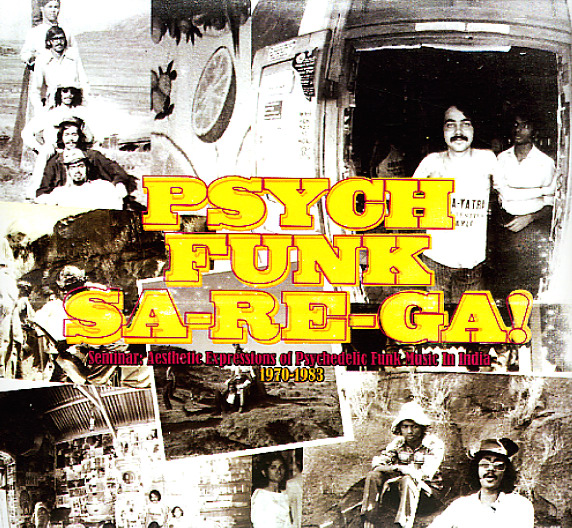 A funky psychedelic kaliedoscope of grooves from India – killer numbers from the 70s and into the early 80s – Psych Funk Sa-Re-Ga, from the folks who put together the equally heavy Psych-Funk 101 and Brazilian Guitar Fuzz Bananas compilations! Most of cuts here have a raw, fuzzed out undercurrent of psychedelia – guitars that buzz or lead searingly, depending on the needs of the number – with heavy, funk-based drums and/or hand percussion with rumbling bass rhythms. From that core, they bust out mightily with more furious percussion, rhythms, mad horn arrangements, and vocals that work as either a sweetener or for even more wild-eyed excitement! In short, global psychedelic funk rhythms with regional Indian folk and classical flourishes, blended with mod, soul, garage and soundtrack influences from around the globe. It's a funky, psychedelic fusion of east and west that's billed as a seminar, but this is no academic endeavor – it's a psych funk party all the way! Includes "The Mod Trade" by The Black Beats, "Psychedelia" by X'Lents, "Somebody To Love – Edit" and "Gairaag Dance Music – Edit" by Kalyanji Anandji, "Dance Music From Hare Rama Hare Krishna" by RD Burman, "Lekar Ham Diwana Dil" by RD Burman feat Asha Bhosle & Kishore Kumar, "Mary Long" by Atomic Forest, "Dharmatma Theme Music" by Kalyanji Anandji, "Phir Teri Yaad" by Hemant Bhosle feat Asha Bhosle, "Thanimayil" by Ilaiyaraaja fet Vani Jairam & Chorus and more. 20 tracks in all – with a thick booklet of notes on each track, plus loads of photos, original album & poster art, and more.  © 1996-2021, Dusty Groove, Inc.