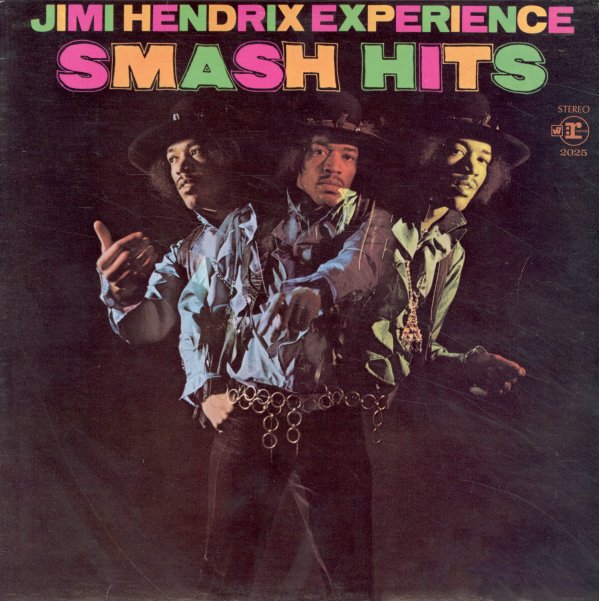 One of those "greatest hits" of Greatest Hits collections – as Smash Hits has come to be regarded by many as a key entry in the cannon of classic rock – thanks to tremendous work from Jimi, bassist Noel Redding, and drummer Mitch Mitchell! Every track here is a gem – definitely the "smash" promised in the title, as the record's filled with Hendrix treasures that include "Purple Haze", "Fire", "The Wind Cries Mary", "Stone Free", "Crosstown Traffic", "All Along The Watchtower", "Red House", "Foxy Lady", and "Hey Joe".  © 1996-2023, Dusty Groove, Inc.
(Late 70s tan label stereo pressing with Warner rim logo – MSK 2276. Cover has light ringwear, some edge wear, and bumped corners.)

Hendrix In The West
Reprise, Late 60s. Near Mint-
LP...$14.99
The great live compilation of classic Hendrix – pulled from incendiary performances at Isle Of Wight in 1970 and other benchmark west coast gigs from '68 to '70! It's as fine of a snapshot of Jimi as you could really hope for, as it features numbers that showcase his fiery blues psych side ... LP, Vinyl record album

Band Of Gypsys
Capitol, 1969/1970. Very Good+
LP...$49.99
An amazing album of raw power from Jimi Hendrix – recorded on New Years Eve 1969, right as the 60s became the 70s – with a stunning sound that certainly presages the hard rock decade to come! Jimi's working with his trio that features Buddy Miles on drums and Billy Cox on bass – ... LP, Vinyl record album

Fleetwood Mac (1975)
Reprise, 1975. Near Mint-
LP...$39.99 (LP...$25.99, LP...$79.99)
The album that brought the excellent, but heretofore underappreciated duo of Lindsey Buckingham and Stevie Nicks into the band – and pretty much changed the fabric of 70s rock! Older fans of the Peter Green and Bob Welch Brit blues eras of Fleetwood Mac may have been in for a shock initially, ... LP, Vinyl record album