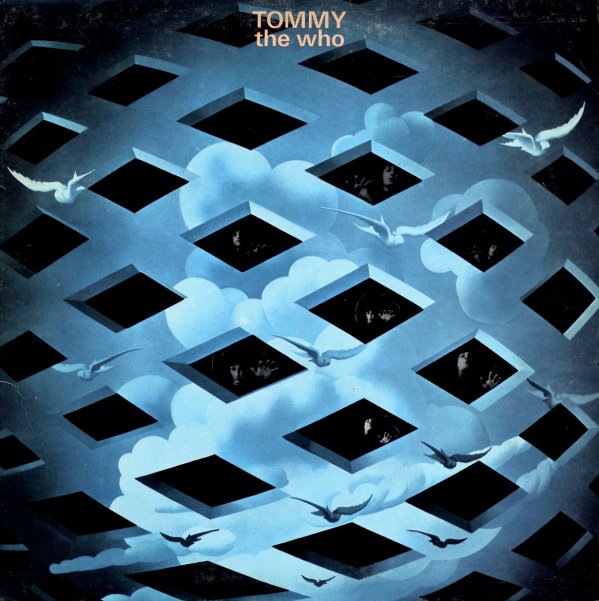 Also available
Who — Tommy ... CD 2.99
An amazing moment from The Who – and from the UK rock scene in general – as Tommy is one of the most fully-conceived concept albums ever recorded – a masterful effort that's still pretty hard to match all these many years later! Pete Townshend really knocked it out of the park with this one – and pushed the group way way past the simpler songs the were recording just a year before – into this deeply introspective territory, spun out both in the album's words and music. The Tommy tale's been well told many times over the years – so we won't bother with the full narrative – but just let us say that it's hard to go wrong with this one, an essential item in any collection of adventurous rock – classic or otherwise. Titles include "The Acid Queen", "It's A Boy", "Sally Simpson", "Miracle Cure", "Pinball Wizard", "Do You Think It's Alright", "Cousin Kevin", "Christmas", "Tommy's Holiday Camp", "I'm Free", and "We're Not Gonna Take It".  © 1996-2023, Dusty Groove, Inc.
(Original black label Decca pressing, including booklet. Vinyl has a short click at the beginning of side 3. Cover has surface wear & small light peels on all panels, and a small gouge in the inner gatefold, name in pen.)

Join Together – Live Performances From The 1989 US Tour
MCA, 1989. Very Good+ 3LP Boxset
LP...$29.99
(Includes the booklet and a Who poster order form. Box has very light wear, but is nice overall.) LP, Vinyl record album

Meaty Beaty Big & Bouncy
Decca, 1971. Very Good Gatefold
LP...$7.99
A classic greatest hits package from The Who – one that had almost as much life as any of their major full length albums, and a set that served to re-introduce new audiences to the group after the success of Tommy and Who's Next! Most of the tracks here predate those albums – pulled ... LP, Vinyl record album

Magic Bus
Decca, 1968. Very Good
LP...$24.99
The Who may look like they're tripping things out a bit with the cover and title to this one – clearly a nod to the Magical Mystery Tour-era Beatles – but the groove here is tight, right, and pretty darn mod all the way through – very much in the spirit of the group's earlier ... LP, Vinyl record album

Who Sell Out
Decca, Late 60s. Very Good+
LP...$18.99 (CD...$19.99)
An incredible album – and one of the most revolutionary rock albums of the late 60s! The Who recorded this one as a tribute to mainstream radio at the time – linking together some solid stand alone tunes with shorter, wittier tracks that were recorded as commercials for products that ... LP, Vinyl record album

Cake
Decca, 1967. Near Mint-
LP...$59.99
Wonderfully tripped-out girl group work from the end of the 60s – almost a psyche-era take on the sound of female pop trios from a few years before! Cake definitely have their roots in a Brill Building, Phil Spector-influenced world – but their overall presentation here is much more ... LP, Vinyl record album