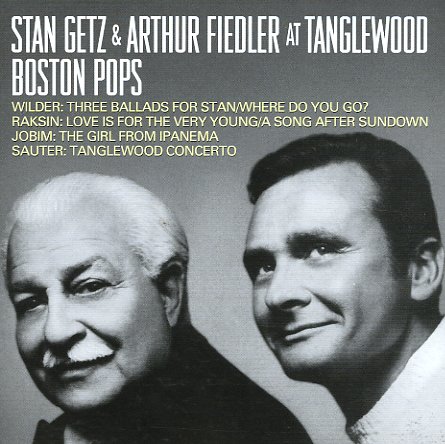 A beautiful bit of lost Getz from the 60s – a record of incredible depth that's somehow gotten lost in the shuffle of time! The album has Stan playing at Tanglewood with a core group that includes Gary Burton, Jim Hall, Steve Swallow, and Roy Haynes, plus musical backings by the Boston Pops – conducted by Arthur Fiedler in a style that's somehow without any of the hoke of his other recordings of the time, and which manages to give Stan some of the best "with orchestra" backings he's ever gotten! There's none of the overwrought modernism of some of the other Getz/orchestra collaborations that we never seem to like as much – and Stan's in incredible Spring Rain-like tone on the whole thing – blowing magically through both the lush and grooving numbers alike! Titles include "Tanglewood Concerto", "Where Do You Go", "Three Ballads For Stan", "A Song After Sundown", and a great orchestral take on "Girl From Ipanema".  © 1996-2023, Dusty Groove, Inc.

What's New?
RCA/Bluebird, 1962. Used
CD...$4.99 (LP...$9.99)
A very unique album from Sonny Rollins – one that features him blowing tenor over some Latin-based rhythms that have a tight uptempo feel. The core group on the album features Jim Hall on guitar, Bob Cranshaw on bass, and Ben Riley on drums – but they're augmented by larger ... CD