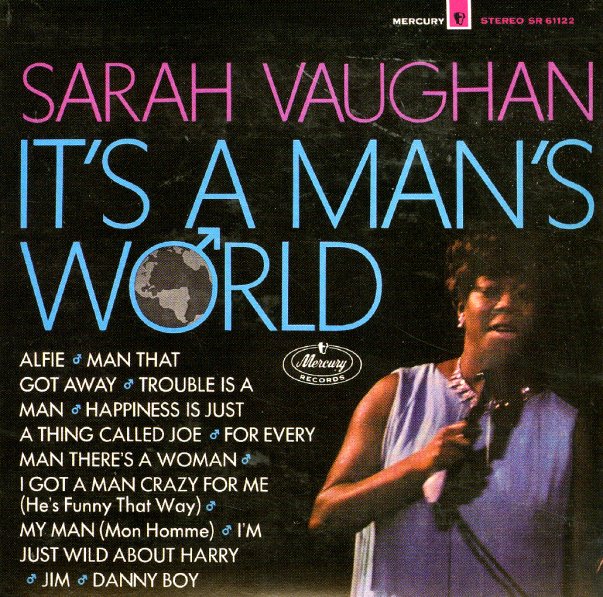 A pretty obscure Sarah Vaughn album – and a nice one! The album's got Sarah singing with arrangements by Hal Mooney, who'd done work for her before in a more standard way, and who here is opening up a bit, at times almost hitting a groovy late 60s mode. Players in the group include Bob James (who also arranged a few numbers), Phil Woods, Benny Golson, and Freddie Hubbard – and titles include "The Man That Got Away", "Alfie", "For Every Man There's A Woman", "Jim", and "My Man".  © 1996-2021, Dusty Groove, Inc.
(Out of print, insert appears to be missing from the set.)

More Sarah Vaughan From Japan Live
Mainstream/Century (Japan), 1975. Used
CD...$24.99
Live material by Sarah Vaughan – recorded in Tokyo, as you might guess from the title – and done with relatively spare backing throughout! The group's a trio, with Carl Schroeder on piano and Jimmy Cobb on drums – but they really lay back at times, and almost let Sarah sing in ... CD

It's A Man's World
Mercury (Japan), 1967. Used
CD...$14.99 (CD...$4.99)
A pretty obscure Sarah Vaughn album – and a nice one! The album's got Sarah singing with arrangements by Hal Mooney, who'd done work for her before in a more standard way, and who here is opening up a bit, at times almost hitting a groovy late 60s mode. Players in the group include Bob ... CD

Ella Fitzgerald & Billie Holiday At Newport (plus Carmen McRae too!)
Verve, 1957. Used
CD...$4.99
Two of the biggest singers who ever worked for Verve Records – captured perfectly at the Newport Jazz Festival in 1957! Ella Fitzgerald steps out with a strong, lively groove on the first half of the set – swinging things with a looser, more upbeat quality than on some of her mellower ... CD