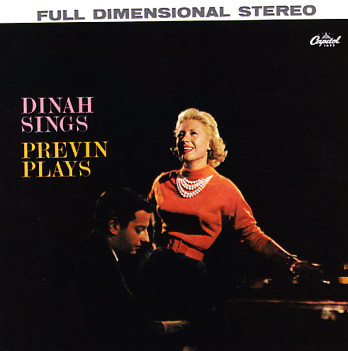 Think what you want about Dinah Shore, she could serve up some pretty great vocals at her best moments – and this album is definitely one of those moments! The style here is laidback and late nite – with Dinah singing alongside backing from the trio of Andre Previn on piano, Red Mitchell on bass, and Frank Capp on drums – all working in an easygoing mode that comes across with a great small club feel. Previn's piano is especially nice – filled with light flourishes that illuminate the tunes nicely, but in a subtle way that's never too over the top – and usually touched with just a hint of sadness to fit the mood of the songs. Titles include "April In Paris", "Then I'll Be Tired Of You", "The Man I Love", "That Old Feeling", "It Had To Be You", "I'll Be Seeing You", and "If I Had You".  © 1996-2020, Dusty Groove, Inc.
(Japanese pressing – ECJ 60045. Cover has a cut corner.)