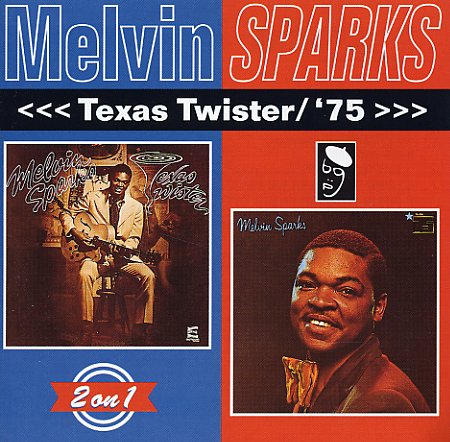 Wicked work from the legendary Melvin Sparks – 2 of his rare post-Prestige sides for the short-lived Eastbound jazz label! Texas Twister is one of Melvin's funkiest albums ever – done in a style that's even harder and rawer than his work for Prestige! The sound is lean and often a bit rough around the edges – with possibly more funk than even jazz in the mix – and players on the set include Caesar Frazier on organ, Bad Bascomb on bass, Ron Bridgewater on tenor, and Idris Muhammad on drums! Prestige funk maestro Bob Porter produced the whole thing, and gets a beautifully soulful sound out of all players – rounding out Melvin's totally cooking work on guitar with some equally great contributions from the rest. Titles include "Whip Whop", "Judy's Groove", "Star In The Crescent", "Texas Twister", "Gathering Together", and "I Want to Talk About You". Melvin Sparks 75 is a record that moves the guitarist a bit more into soul territory than the funky jazz of his early 70s years – but it's still a heck of a great little record overall! The tracks are shorter than before and the backings are bigger – but Melvin's work on the strings still gets plenty of space in the arrangements, and there's more than a few funky instrumentals here that more than make the album great. Plus, Little Jimmy Scott sings vocals on a few cuts – "I Got To Have You" and "If You Want My Love" – both done in a style that's fuller and more soulful than any of the work cut under his own name! Other tracks are mostly instrumental, and include the funky numbers "Bump & Stomp", "Get Down With The Get Down", and "Get Ya Some" – plus "Looking For Love", "In The Morning", and "Mocking Bird".  © 1996-2023, Dusty Groove, Inc.