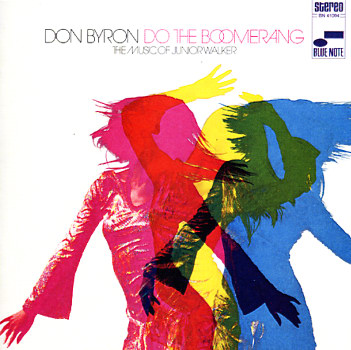 Do The Boomerang – The Music Of Junior Walker

A nice little shift in style for saxophonist Don Byron – and a record that really cuts loose from his more academic projects, in a way that's nicely fitting the spirit of Junior Walker that inspired it! Don's take on Walker's music isn't runaway Motown revival, but more of a funky jazz interpolation of older tunes made famous by Walker – played here by a small combo that includes guitar, Hammond, trombone, and a bit of vocals from Chris Thomas King and Dean Bowman. The best numbers are lean and funky, with almost a Stanley Turrentine-ish soul use of the tenor – and our favorite track is oddly a remake of James Brown's "There It Is", heard here with other titles that include "Do The Boomerang", "Mark Anthony Speaks", "Cleo's Mood", "Satan's Blues", "Hewbie Steps Out", "Tally Ho", "Pucker Up Buttercup", and "What Does It Take".  © 1996-2021, Dusty Groove, Inc.
(BMG club pressing.)

Street Of Dreams
Blue Note, 1964. Used
CD...$11.99 (CD...$9.99)
One of our favorite albums ever from guitarist Grant Green – an amazingly stretched-out session that's served up with a good deal of modal jazz in the rhythms – and a date that features killer work from Larry Young on organ and Bobby Hutcherson on vibes! The pair join Green in a ... CD

Somethin' Else (with bonus track)
Blue Note, 1958. Used
CD...$4.99
A landmark album – even if it was the only session that Cannonball Adderley ever cut for Blue Note! The album was recorded at a time when Adderley was working with Miles Davis – and as such, the session features a group that includes Miles, blowing trumpet in a cool tone that's a ... CD

Hustlin' (RVG remaster edition)
Blue Note, 1964. Used
CD...$4.99
One of Stanley Turrentine's few organ-based sessions for Blue Note – recorded in the company of his wife Shirley Scott, a real cooker on the Hammond who holds it down masterfully here – and great band that's filled out by Kenny Burrell on guitar, Bob Cranshaw on bass and Otis Finch on ... CD