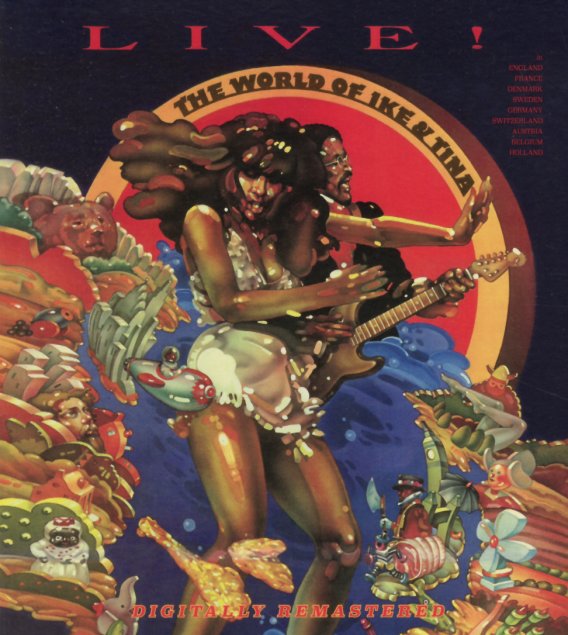 A fiercely funky live set from Ike & Tina Turner – one that almost feels like some of the James Brown albums at The Apollo – given the expanded structure of the presentation, which also includes the whole Ike Turner universe! The show gets announced with this bold sense of pride – ala some of James' "showtime" announcements – and it begins with funky backings from The Family Vibe, who continue the groove throughout – then opens to the Ikettes singing on their own, before Tina takes the stage and makes the whole thing really come together! There's a great variety of material here – all of which gets a really sharp sound, thanks to the setting – and Ike and the crew really transform the tunes, and set them up perfectly for Tina's vocals to knock them out of the park. Tracks include "Let Me Touch Your Mind", "Shaft", "I Gotcha", "She Came In Through The Bathroom Window", "Dust My Broom", "I Wish It Would Rain", "Get Back", "Games People Play", "Annie Had A Baby", "Chopper", "River Deep Mountain High", and "Just One More Day".  © 1996-2022, Dusty Groove, Inc.
(Cover has some ringwear, edge wear, and half split seams on one side.)

Best Of Ike & Tina Turner
Blue Thumb, 1973. Near Mint-
LP...$9.99
A combination of the best cuts from 2 of the last albums that Ike & Tina cut together – both of them very hard, raw, and soulful, with a good rootsy feel that makes them stand out against Ike & Tina's other albums from the time! There is a great little funk number included – ... LP, Vinyl record album

Love & Conversation
United Artists, 1977. Near Mint-
LP...$16.99
JR's cut some records that have a rootsier feel – but this one features smooth modern arrangements and production by Phil Medley and Buddy Scott. The set begins with an uptempo clubby remake of "Taste of Honey", and also features a nicely grooving take on "Stella By ... LP, Vinyl record album

Future Star
United Artists, 1978. Very Good+
LP...$14.99
Nice second album by this band who's better known for their proto disco LP on Buddah. This one's got less of a disco feel, but it still has a sound that's mostly uptempo funk, with some good choppy grooves, and a few mellower soul cuts. Tracks include "Earl & Pearl", "Realize ... LP, Vinyl record album

Nothin's Got Me
United Artists, 1977. Very Good+
LP...$9.99
A nice bit of late 70s southern soul from singer Dutch Robinson – best known for his early work with the Ohio Players! The session gets a little boost from some strong Horace Ott arrangements – full and rich, but never too slick – and the album features 9 tracks in all, including ... LP, Vinyl record album