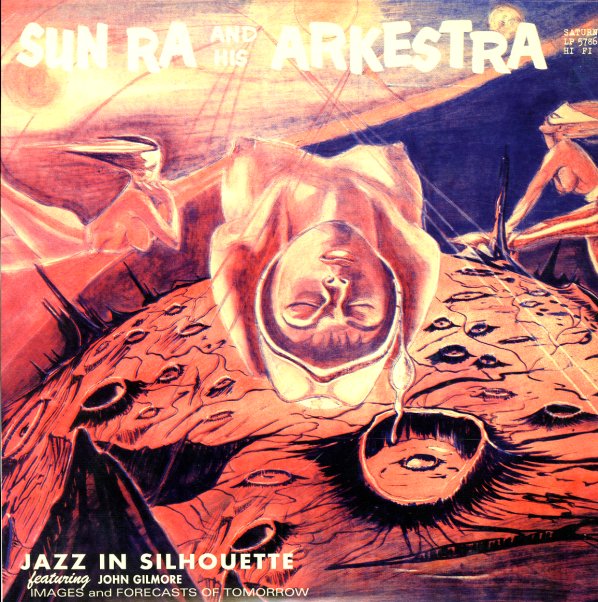 Sun Ra's really moving forward with this classic set – refining the sound of his Chicago-based Arkestra, and reaching for new territory that moves him way past familiar jazz modes! The cover bills the group as playing "music from tomorrow's world" – and you can definitely hear that on some titles here, including one number that features Ra on some really haunting celeste, and another that features Marshall Allen making weird noises with his mouthpiece! The group is all greats from the old days – John Gilmore on tenor, Marshall Allen on flute, Pat Patrick on baritone and flute, James Spaulding on alto and flute, Hobart Dotson on trumpet, Charles Davis on baritone, and Ronnie Boykins on bass – and titles include "Hours After", "Saturn", "Ancient Ethiopia", and "Blues At Midnight".  © 1996-2021, Dusty Groove, Inc.

Discipline 27-II (with bonus track)
Saturn/Corbett vs. Dempsey, 1972. Used Gatefold
CD...$9.99 (CD...$12.99)
One of Sun Ra's greatest albums of the 70s – recording during the same sessions that yielded the famous Space Is The Place record for Blue Thumb, and done with a very similar feel – an expansive configuration of the Arkestra in peak form! The range of expression is really incredible ... CD

Love In Outer Space
Leo (UK), 1983. Used
CD...$9.99
One of the strongest Sun Ra albums in wide release during the 80s – a live set from Utrecht in 1983, done with a tightly-crafted sound that really focuses the energy of the group and displays their great range and capabilities in a number of modes! Most of the set is relatively inside, with ... CD

Greatest Hits – Easy Listening For Intergalactic Travel
Evidence, 1960s/1970s. Used
CD...$12.99
It's hard to conceive of the idea of a "greatest hits" for Sun Ra – as none of his records even cracked the charts – but this set is a much-needed one that offers a strong sampling of Ra's rich body of work, summed up nicely by 18 tracks that over a keen picture of his unique ... CD

Dancing Shadows (aka Nothing Is)
Magic Music (Germany), 1966. Used
CD...$9.99
One of the best non-Saturn Sun Ra albums of the 60s – material recorded live on a tour of New York colleges in 1966, and very much in a spirit that captures the Arkestra at their best! Longer tracks are juxtaposed nicely with shorter ones – in a way that has the group running very ... CD

Singles
Saturn/Evidence, Mid 50s/1960s/1970s/Early 80s. Used 2 CDs
CD...$11.99
A totally essential 2 CD set that brings together a huge amount of singles that were recorded by Sun Ra and others for his legendary Saturn label! As you probably know, the albums that were recorded for Saturn were rare enough – but the singles on the label were even rarer, and some of them ... CD

Space Is The Place
Impulse, 1972. Used
CD...$8.99
A brilliant record by Sun Ra & The Arkestra – and an album that forever gave them a slogan to live by! The record's different than some of the other Arkestra work from the time – in that it's a bit tighter and more spiritual, more in keeping with the style of the Blue Thumb label, ... CD

Love & Peace
Evidence, 1982. Used
CD...$12.99
A wonderful later album from these two Coltrane bandmembers – reunited here in the early 80s, working in a mode that's very much in keeping with their rich spiritual jazz legacy! The group on the album's a quintet – with Pharoah Sanders on tenor, Richard Davis on bass, and Jean-Paul ... CD