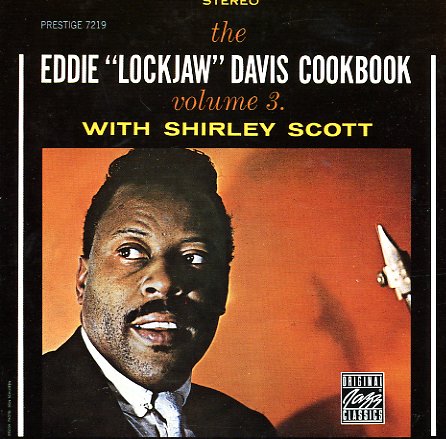 Volume 3 of Lockjaw's classic early Cookbook sessions – cut for Prestige in a key transitional moment, when Lock was trying to break past the R&B roots of earlier years, and emerge as a more sophisticated jazz soloist, capable of carrying an idea way past the short format of singles and jukebox sides. The sessions provide a perfect format for such an effort – as the tracks are long and open-ended, and match Eddie with a great quintet that includes Shirley Scott on organ and Jerome Richardson on flute and tenor. Tracks include "Heat & Serve", "Simmerin", and "The Goose Hangs High".  © 1996-2023, Dusty Groove, Inc.
(Early 90s OJC pressing)

Live At The Widder
Divox (Switzerland), 1982. Used
CD...$11.99
With Gustav Csik on piano, Isla Eckinger on bass, and Oliver Jackson on drums. CD

Bacalao
Prestige/OJC, 1959. Used
CD...$11.99
A pretty rare one – and one of the best albums that Eddie Lockjaw Davis ever recorded! The album takes Eddie's usual trio with Shirley Scott on organ, and adds in some extra bongos and conga – by Luiz Perez and Ray Barretto, respectively – to create a Latinized version of soul ... CD

Eddie Lockjaw Davis Cookbook – Vol 2 (with bonus track)
Prestige/OJC, 1958. Used
CD...$16.99
Volume 2 of Lockjaw's classic early Cookbook sessions – cut for Prestige in a key transitional moment, when Lock was trying to break past the R&B roots of earlier years, and emerge as a more sophisticated jazz soloist, capable of carrying an idea way past the short format of singles and ... CD

Soul
Prestige/OJC, 1958. Used
CD...$9.99
An excellent session! The record's filled with soul, emotion, and most of all, a hell of a lot of creativity – enough to show that Coleman Hawkins was still a great force to be reckoned with, even when labels were sticking him into loose blowing sessions like this! The group features Kenny ... CD

We Three
New Jazz/OJC, 1958. Used
CD...$6.99
A key outing from drummer Roy Haynes – a classic trio session that has a lot more energy than the usual set from the time – thanks to equal participation from Paul Chambers on bass and Phineas Newborn on piano! The unified approach hinted at in the title certainly comes through in the ... CD

Workin' With The Miles Davis Quintet (20 bit remaster)
Prestige, 1956. Used
CD...$11.99 (CD...$1.99)
A record that hardly seems like workin at all, given the ease with which the group lays down the music – especially trumpeter Miles Davis, whose work here is like magic – and tenorist John Coltrane, who was really coming into his own with this recording! The set's one of a handful from ... CD

Poll Winners Three!
Contemporary/OJC, 1957. Used
CD...$9.99
The Poll Winners reunite for the third time! The combo are a surprisingly fresh group considering the circumstances – a concept outfit put together by Contemporary in the late 50s featuring winners of the Downbeat Poll – something that would make you imagine an album of the lesser ... CD

Here's Jaki
Prestige/OJC, 1961. Used
CD...$9.99
Important early work from Jaki Byard – one of his first records as a leader, and a wonderful set of quirky piano trio tunes! Jaki's working here with Ron Carter on bass and Roy Haynes on drums – in a format that's similar to other trio records of the time, but which is really pushed to ... CD

Soul Meeting
Prestige, 1960. Used
CD...$5.99
Rare early King Curtis jazz session – cut in the years before he settled down to his tight short soul instrumental recordings for Atlantic. The record is very much in the Prestige soul jazz style of the early 60s – and King's set up nicely in a group that features Nat Adderley, Wynton ... CD

Easy Like – Barney Kessel Vol 1
Contemporary/OJC, 1953/1956. Used
CD...$9.99
The first album in a brilliant run of work that Barney Kessel did for Contemporary Records in the 1950s – material that forever went onto shape the sound of jazz guitar, and which stands right up there with some of the best of his generation! In a way, the Kessel heard here is even fresher ... CD