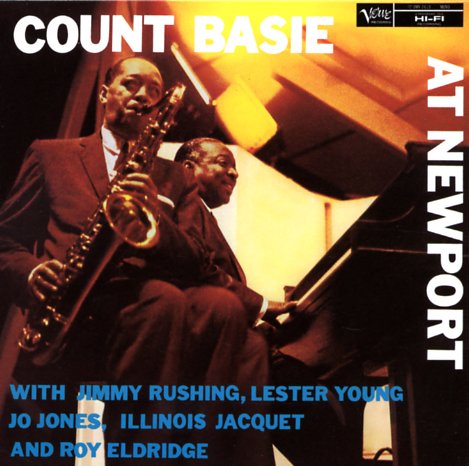 The 50s Basie band, loud and proud – recorded beautifully by Verve on the stage of the Newport Jazz Festival in 1957 – a great year, both for the group and the fest! The lineup here features Count Basie firmly at the helm on piano – with players who include Lester Young, Illinois Jacquet, and Frank Foster on tenor – plus Thad Jones and Joe Newman on trumpets – all tightly grooving on arrangements by Ernie Wilkins, AK Salim, and others – filled with plenty of Basie jumps, leaps, and vamps! Jimmy Rushing sings vocals on the track "Sent For You Yesterday & Here You Come Today" – and other tracks include "Lester Leaps In", "Swingin At Newport", "Polka Dots & Moonbeams", and "Evenin". CD also contains 5 more bonus tracks from another Verve album – Count Basie & Joe Williams at Newport, most with Williams on vocals – including "All Right Okay You Win", "The Comeback", "Roll 'Em Pete", "Smack Dab In The Middle", and "One O' Clock Jump".  © 1996-2022, Dusty Groove, Inc.
(Out of print.)