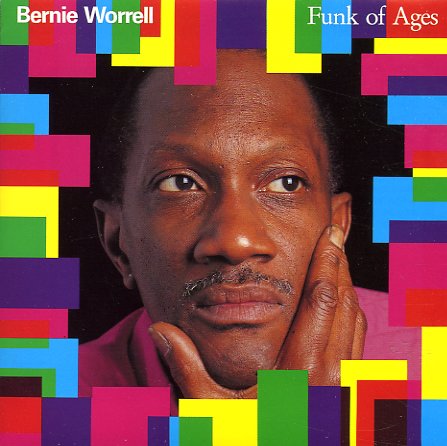 Maybe not the funk of ages, but a mighty nice solo set from Bernie Worrell – done at a key stretch when he was working away from George Clinton and the P-Funk universe! The set's got Bernie opening up in a blend of jazz and funk – and some tracks feature lead vocals, in a style that takes off from his earlier solo album on Arista, but tuned here with a bit more of that electro vibe that the Gramavision album was doing so well at the time! Bernie handles much of the music himself, but there's plenty of key guests on the record too – rhythms from Sly & Robbie, more keyboards from Herbie Hancock, guitar from Keith Richards and Vernon Reid, and seven some backing vocals from David Byrne and other old associates from the P-Funk years. Titles include "Straight Ahead", "Sing", "Don't Piss Me Off", "Ain't She Sweet", "V Spy", "BW Jam", "Volunteered Slavery/Bern's Blues/Outerspaceways", and "Beware Of Dog".  © 1996-2020, Dusty Groove, Inc.
(Out of print, small cutout through booklet & traycard artwork.)

Funk Of Ages
Gramavision/Warner (Japan), 1990. Used
CD...$14.99
Maybe not the funk of ages, but a mighty nice solo set from Bernie Worrell – done at a key stretch when he was working away from George Clinton and the P-Funk universe! The set's got Bernie opening up in a blend of jazz and funk – and some tracks feature lead vocals, in a style that ... CD

Potato Hole
Anti, 2009. Used
CD...$4.99
A different sort of sound for Booker T – working here not with the MGs, but with backing from the Drive By Truckers, and a fair bit of guitar from Neil Young! The album's still heavy on the sorts of organ lines we love in Booker's work stretching back to the early 60s years at Stax Records ... CD