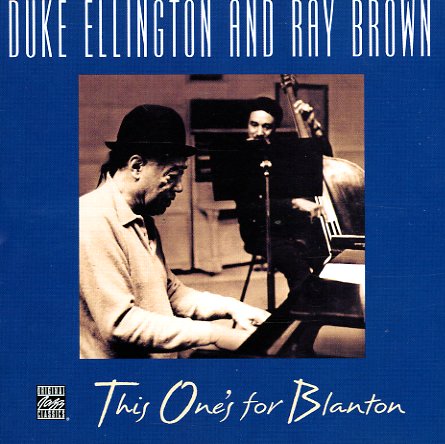 This One's For Blanton

A great tribute to the late bassist Jimmy Blanton – served up by his old boss Duke Ellington, working here on piano alongside the bass of Ray Brown! This spare piano/bass session is a rarity in Duke's catalog – and it's a real later gem that captures the warmth and imagination of the Ellington piano sound in a near-solo setting. Brown's tones are round and nicely soulful – always a treat, even if not entirely in Blanton's spirit – and titles include "Pitter Panther Patter", "Do Nothin Till You Hear From Me", "Sophisticated Lady", "See See Rider", and "Fragmented Suite For Piano & Bass" – a great extended piece that takes up all of side two!  © 1996-2022, Dusty Groove, Inc.
(Out of print.)

Ellington At Newport 1956 – Complete
Columbia, 1956. Used 2 CDs
CD...$4.99 (LP...$39.99)
One of the first albums to ever issue recordings made at the Newport Jazz Festival – quite a big hit, and the beginning of a real trend in jazz! The set's also some great work by Duke – free to perform in a setting that's not bound by some of the time restrictions of earlier years, ... CD