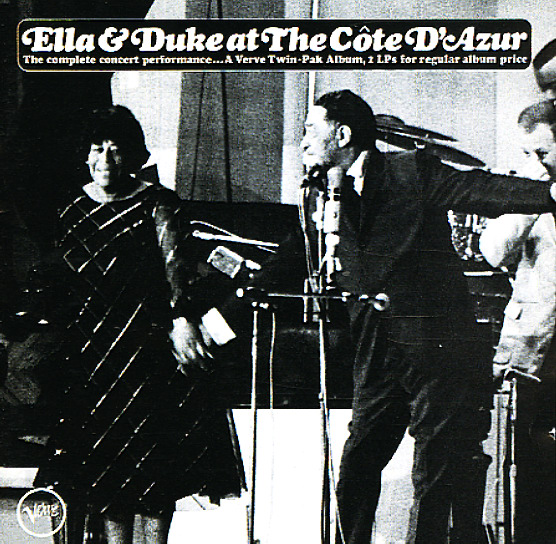 Ella & Duke At The Cote D'Azur

A superstar performance from the Antibes jazz festival at Cote D'Azur – one that features Ella Fitzgerald and Duke Ellington sharing the stage, in a concert that was also recorded for a film! Most numbers here feature the full Ellington orchestra backing Ella up – but a few other numbers feature just backings from a trio with Jimmy Jones on piano and Grady Tate on drums. Duke and Ella trade the spotlight nicely – and Fitzgerald only sings on about half of the set, numbers that include "Mack The Knife", "The More I See You", "Lullaby Of Birdland", "Jazz Samba", "How Long Has This Been Going On", and "Going Out Of My Head". Ellington's heard on other instrumental performances – some of which are a bit more upbeat and unbridled than usual – almost in a Basie mode. These tunes include "Trombonio Bustosolssimo", "Diminuendo In Blue & Blow By Blow", "The Old Circus Train Turn Around Blues", and "The Matador".  © 1996-2021, Dusty Groove, Inc.