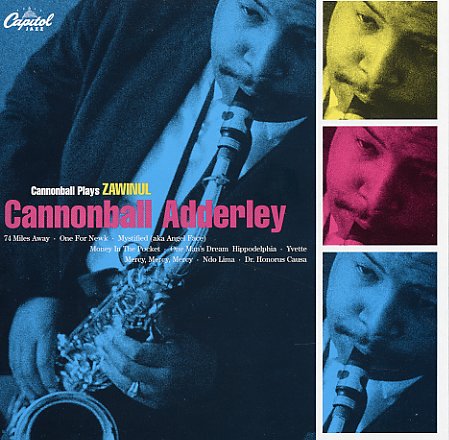 A foolproof set of Cannonball's 60s recordings of compositions by pianist Joe Zawinul – tracks recorded and released on Cannonball's albums of the era, and featuring all star line ups that included Zawinul on the keys (natch), Roy McCurdy on drums, Nat Adderly on coronet, Sam Jones on bass and a host of other luminaries! The original sessions were produced by David Axelrod, and are culled from the 74 Miles Away, Why Am I Treated So Bad, Domination, Cannonball In Japan albums and more! 10 tracks including "74 Miles Away", "One For Newk", "Mystified", "Money In The Pocket", "One Man's Dream", "Hippodelphia", "Ndo Lima", "Mercy, Mercy, Mercy" and more.  © 1996-2022, Dusty Groove, Inc.

Cannonball Adderley Quintet In Chicago (Japanese paper sleeve edition)
EmArcy/Universal (Japan), 1959. Used
CD...$14.99
A great session from 1959 – one that features John Coltrane playing with the Adderley group, recorded in Chicago when they were stopping through the city with Miles Davis' combo at the time! In fact, since the rhythm section includes Wynton Kelly, Paul Chambers, and Jimmy Cobb – and ... CD

Things Are Getting Better (20 bit remaster)
Riverside, 1958. Used
CD...$11.99
An album that definitely lives up to its title – given the great change and evolution in the style of Cannonball Adderley's music – definitely pointed towards the soul jazz fame to come in the 60s! The group here has Adderley's alto in the company of some all-stars who may not be his ... CD

Money In The Pocket – Recorded Live At The Club In Chicago 1966
Capitol, 1966. Used
CD...$6.99
A great lost slice of Cannonball Adderley from the 60s – material recorded live in Chicago in 1966, but never issued at the time! The performance on the set is a real corker – right up there with any of Cannonball's other live albums for Capitol at the time, and featuring a similar ... CD

Somethin' Else (RVG Remaster Edition)
Blue Note, 1958. Used
CD...$6.99 (LP...$19.99)
A landmark album – even if it was the only session that Cannonball Adderley ever cut for Blue Note! The album was recorded at a time when Adderley was working with Miles Davis – and as such, the session features a group that includes Miles, blowing trumpet in a cool tone that's a ... CD

Caldera/Sky Islands
Capitol/Soulmusic.com (UK), 1976/1977. Used
CD...$9.99
A pair of killers from this jazzy Latin combo of the 70s! First up is the self-title Caldera album – a jazzy Latin fusion classic – and the first album by the border-crossing combo! The group features both North and South American players – coming together in a hard-riffing ... CD