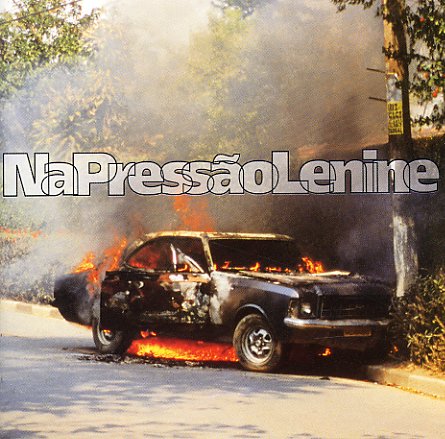 One of our favorite albums ever from groundbreaking Brazilian talent Lenine – a mad mix of soulful vocals, flanged-out guitars, rootsy percussion, and modern production with some slight amount of the kinds of sample influences being used by other modern Brazilians (like Carlinhos Brown or Arnaldo Antunes). The real difference, though, is Lenine's great guitar work – which strikes out through the mix in a haunting Beck-ish way. His voice is pretty darn great, too – with a deep richness that we haven't heard since Milton Nascimento or Djavan. The whole package is pretty darn nice – and tracks include "Arede", "Tubi Tupy", "Alzirae Torre", "Relampiano", "Eu Sou Meu Guia", and "Nao Pressao".  © 1996-2022, Dusty Groove, Inc.
(Out of print.)

O Dia Em Que Faremos Contato
Ariola (France), 1997. Used
CD...$4.99 8.99
Great work from one of Brazil's best artists of the past 10 years! Lenine has a groundbreaking style that mixes acoustic guitar, soulful vocals, hard percussion, electronics, and modern rock into a pomo blend that sounds a heck of a lot better than our cliche-littered description. The record's ... CD

Chao
Universal (Brazil), 2001. Used
CD...$6.99 12.99
One of the darkest records we've heard to date from Lenine – as if you couldn't guess from the title! Lenine's an artist who always grabs our ear – easily one of the most impressive song stylists in Brazil over the past decade or so – and like some of his best contemporaries, a ... CD

Black & Blue (aka Tamba – Luiz Eca/Bebeto/Helcio Milito)
Dear Heart/BMG (Japan), 1974. Used
CD...$19.99 24.99
A sublime 70s groover from the great Tamba Trio! This one works off of the expanded sound that the bossa jazz combo were forging on their late 60s work for CTI – adding in some more complicated arrangements by Luiz Eca to the regular piano/bass/percussion groove, pushing the sound into a ... CD