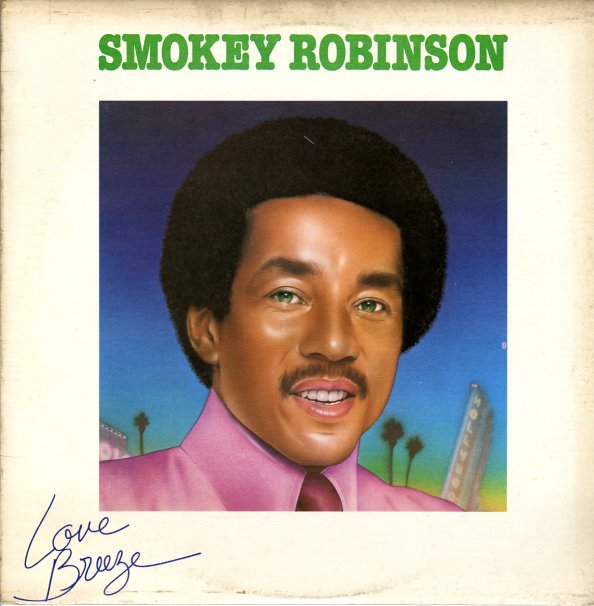 Love Breeze finds Smokey effortlessly cutting back and forth from a funky 70s dancefloor soul mode to more delicate, classic soul steeped numbers and slow jams. He does it all very well on a set we overlooked for too many years! Titles include "Why You Wanna See My Bad Side", "Feeling You, Feeling Me", "Shoe Soul", "Daylight & Darkness", "I'm Loving You Softly" and more.  © 1996-2022, Dusty Groove, Inc.
(Includes the printed inner sleeve. Cover has light ring & surface wear.)

Where There's Smoke
Motown, 1979. Near Mint-
LP...$6.99
Smooth Smokey at the end of the 70s – an album that has him moving from the Quiet Storm sound into the more hook-based style that would earn him a fair bit of hits in the 80s! The Robinson vocal approach is always sweet, warm, and mellow on the set – especially on the album's more ... LP, Vinyl record album

Marvin Gaye & His Girls
Tamla, 1969. Very Good
LP...$6.99
A classic batch of Motown duets from Marvin Gaye and some of his best female co-stars – with a few contributions a piece from Mary Wells, Kim Weston, and Tammi Terrell! Although other artists explored the male/female duet mode back in the 60s, few did it as well as Marvin – thanks in ... LP, Vinyl record album

Fulfillingness' First Finale
Tamla, 1974. Very Good+ Gatefold
LP...$19.99 (CD...$4.99)
A fantastic 70s classic from Stevie Wonder – part of a great run of records in which he broke completely from his earlier Motown sound – and showed the world that he was one of the true musical visionaries of the decade! The righteous currents of his previous few albums are fully in ... LP, Vinyl record album

Flying High Together
Tamla, 1972. Very Good
LP...$4.99
Excellent 70s work by Smokey and crew – sort of their way of showing the emerging east coast vocal stars how much talent they still had! The record has a sweet slightly-modern sound, with an approach that hints at Smokey's later Quiet Storm sound, and arrangements by David Van De Pitte and ... LP, Vinyl record album

Smokey Robinson & The Miracles Greatest Hits Vol 2
Tamla, 1967. Very Good+
LP...$9.99
Lots of great ones – from that period when Smokey was making the group an all-male one, with a harmony sound that was a bit harder than earlier days. Titles include "Going To A Go Go", "Tracks Of My Tears", "Ooo Baby Baby", "I Second That Emotion", ... LP, Vinyl record album

Marvin Gaye's Greatest Hits
Tamla, 1970s. Very Good+
LP...$14.99
Great cuts from the second decade of Marvin Gaye's career at Motown – really magic numbers pulled from that 70s period when he was really taking off with his music! There's a righteous undercurrent here that goes way beyond the simple soul of the 60s – and the set offers a great cross-s ... LP, Vinyl record album

Syreeta (1980)
Tamla, 1980. Very Good+
LP...$9.99
One of Syreeta's deepest albums ever – proud, bold, and wonderfully righteous throughout – filled with a sense of message and purpose that was quite rare for Motown at the start of the 80s! Syreeta's really tapped back into that wonderful energy that made her so great when first ... LP, Vinyl record album