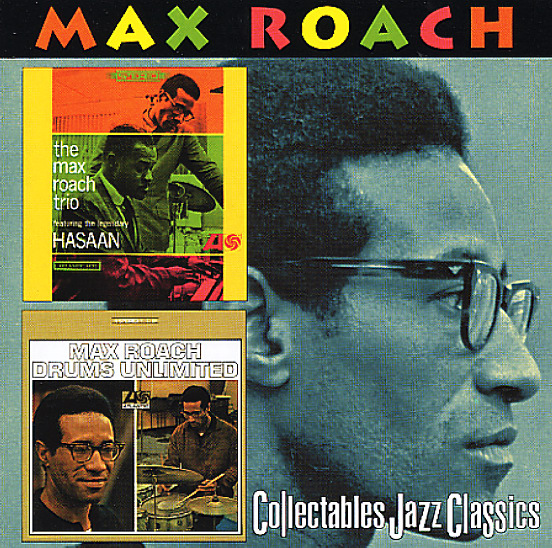 Great stuff by Max Roach – and 2 albums that prove what a great talent he had for finding other lesser-known jazz players! The first album in the set features Max's trio with an amazing piano player named Hasaan – one that we can't find on any other records, and who has a power and approach that ranks him with modernist greats like Monk, Randy Weston, and Herbie Nichols. The album includes the tracks "Off My Back Jack", "Almost Like Me", and "Din-Ka Stret", all written by Hasaan. The other album's a great one, too – and features 2 sides of Max's own playing. One batch of tracks has Max in the company of a tight group of soul jazz players like Freddie Hubbard, Roland Alexander, James Spaulding, and Ronnie Matthews. The group is very tight, and they've got hard wailing sound similar to a Blue Note group, but with a bit more of a soul jazz feel. They play on two long tracks – "Nommo" and "In the Red". The rest of the tracks – "Drums Unlimited", "The Drum Also Waltzes", and "For Big Sid" – feature Max playing solo, which is a rare treat for a recording of this vintage. The tracks are great, with a very musical groove, and lively playing by Max that never gets too self indulgent.  © 1996-2021, Dusty Groove, Inc.