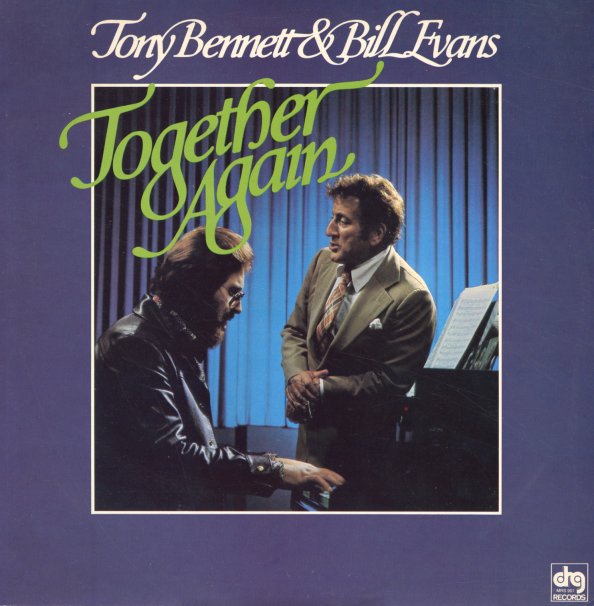 A great second pairing of this hip team – further proof that Tony Bennett was a hell of a jazz singer when he wanted to be! Titles include "You're Nearer", "Lonely Girl", "You Must Believe In Spring", "Two Lonely People", and "The Bad & The Beautiful".  © 1996-2022, Dusty Groove, Inc.
(DRG pressing.)

Kral Space
Catalyst, 1977. Near Mint-
LP...$14.99
Hip, breezy, and wonderful! Irene Kral's a good vocalist, but she's never been one of our favorites – until we heard this album! The record's a totally hip batch of jazzy tracks with a 70s approach to the kind of underground songwriter styles used in the 60s by artists like Jackie & Roy ... LP, Vinyl record album

Orchestra Arranged & Conducted By Michel Legrand
Mainstream, 1972. Near Mint- Gatefold
LP...$4.99
A beautiful collaboration between Sarah Vaughan and Michel Legrand – and easily one of Sarah's greatest albums of the 70s! As he was doing with other singers at the time, Legrand helps Vaughan hit a new level of sophistication here – bringing in tunes that really get past simple pop ... LP, Vinyl record album

Mister B & The Band – Savoy Sessions
Savoy, 1945/1946. Near Mint- 2LP Gatefold
LP...$4.99
Amazing work from the early, legendary years of Billy Eckstine – that time when he was fronting one of the hippest backing groups a vocalist could hope to have! Eckstine's voice was already becoming the stuff of legend by the time of these recordings – but thanks to contributions from ... LP, Vinyl record album

Together – The Legendary Big Band Of Billy Eckstine
Spotlite (UK), 1945. Near Mint-
LP...$9.99
Great work from the early years from Billy Eckstine – including one track with Billy on trumpet! Band members include Fats Navarro on trumpet, Gene Ammons and Budd Johnson on tenors, Leo Parker on baritone, and Art Blakey on drums! The set also features some vocals from Lena Horne and Sarah ... LP, Vinyl record album

Where Is Love?
Choice, 1975. Sealed
LP...$6.99
Mid 70s magic from vocalist Irene Kral – one of a handful of albums that really had Kral setting herself apart from most other jazz vocal contemporaries! The approach here is very simple – just Irene's voice and piano backing from Alan Broadbent – but a hell of a lot goes on in ... LP, Vinyl record album

Night Mood – The Music Of Ivan Lins
Milestone, 1987. Near Mint-
LP...$9.99
Mark Murphy sings the music of Ivan Lins – a great mix of modes, with instrumentation from Azymuth, and work from Frank Morgan on alto and Claudio Roditi on trumpet! LP, Vinyl record album

Finding A New Friend
Fontana, Mid 60s. Near Mint-
LP...$14.99
A great collaboration between Oscar Brown Jr. and the breezy Brazilian singer Luiz Henrique! Henrique was one of Brown's "discoveries", as was Sivuca, who also plays and arranges on the LP – gracing it with his classic bossa/jazzy kind of groove. The whole thing's an excellent mix ... LP, Vinyl record album

Back Again
MPS, 1979. Very Good+
LP...$2.99
A groovy late 70s outing from the Hi Los – done at the same time that group member Gene Puerling was having a great run for MPS with his group The Singers Unlimited! The style here's a bit like the Hi Los of old, but it's also got some of the smoother, sweeter tones that Puerling developed ... LP, Vinyl record album