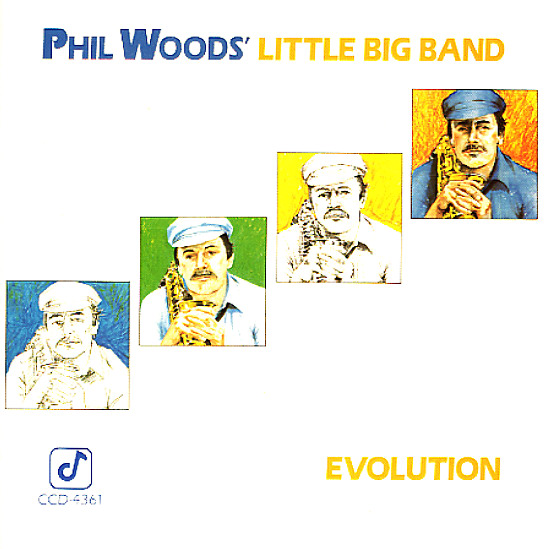 With Tom Harrell on trumpet and flugelhorn, Nick Brignola on baritone, Hal Crook on trombone, Nelson Hill on tenor, Hal Galper on piano, Steve Gilmore on bass, and Bill Goodwin on drums.  © 1996-2022, Dusty Groove, Inc.
(Out of print.)

Gratitude
Denon (Japan), 1986. Used
CD...$9.99
A great later swinger from Phil Woods – a tight acoustic session recorded for the Denon label in Japan, and put together with a really classic feel overall! Wood's alto is amazing – sharp and fluid right from the start, and set up with a crack group that includes Tom Harrell on trumpet ... CD

Rights Of Swing (Music Heritage Society pressing)
Candid/Musical Heritage Society, 1961. Used
CD...$6.99
Really compelling large group work from Phil Woods – one of his first-ever efforts of its type, and a tremendous session that's filled with solos from a wide array of very hip players! The whole album's built around a 5-part "Rights Of Swing" work penned by Woods – a jazz ... CD

Round Trip
Verve, 1969. Used
CD...$9.99
Hip and groovy work from Phil – very different than both his earlier bop-heavy sides, and his freer European recordings – recorded with some great backings by Johnny Pate, the excellent Chicago soul arranger who also did some great soundtrack work! Pate's come up with some tight short ... CD