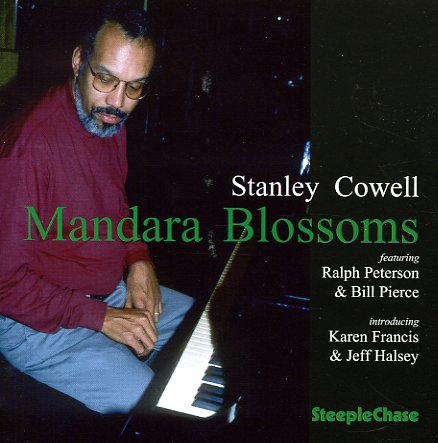 An unusual 90s session from Stanley Cowell – but a great one too! The record features the talents of vocalist Karen Francis on most numbers – one of the first times we remember Stanley working with a singer, in a set of tunes that includes vocal readings of some great compositions from the Cowell songbook! Francis' tone is somewhat brighter than you might expect – spiritual at points, straighter at others – and the rest of the group features Bill Pierce on tenor, Jeff Halsey on bass, and Ralph Peterson on drums. Includes a wonderful reading of "Equipoise", plus "Daydream", "I Think It's Time To Say Goodbye Again", "This Life", "Mandara Blossoms", "Winter Reflections", and "Rivers Of Our Fathers".  © 1996-2022, Dusty Groove, Inc.
(Out of print.)

Hot House (Catalonian Fire/Tete)
Steeplechase (Denmark), 1974. Used 2CD
CD...$19.99
Two 70s albums back to back in one package – both great examples of the genius of Spanish pianist Tete Montoliu! Catalonian Fire is filled with the kind of quick-witted piano work we've really come to admire from Tete Montoliu – who really hits a new level of genius on his 70s ... CD

Life Force Jazz & Blues Compilation
Life Force Jazz, Late 70s/1980s/1990s. Used
CD...$8.99
A treasure trove of obscure soul jazz recordings from the west coast scene – pulled from 25 years' worth of music on the Life Force Jazz label, in a style that gives a splendid representation of the rich talents that are still waiting for a fuller level of exposure in the Bay Area! A few of ... CD