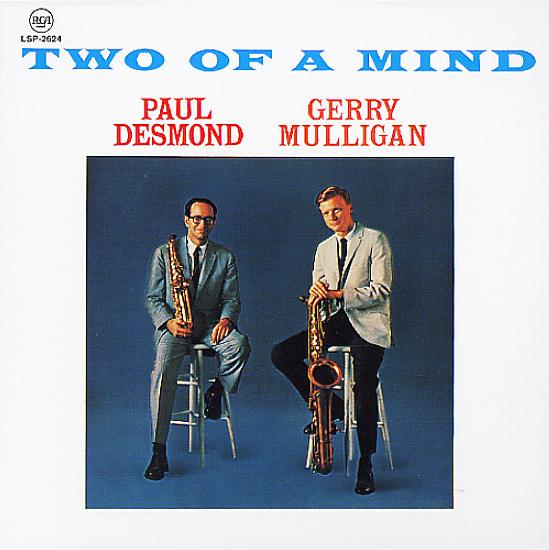 Two Of A Mind (First Editions Series with bonus tracks)

A reunion of sorts for Paul Desmond and Gerry Mulligan – given that the pair had played together on record 5 years before, in a similar session for Verve! This album's almost lighter and more airy than the previous one – as it's done in a mode that echoes strongly with Desmond's own genius at RCA at the time – using a piano-less quartet format that has both horns carving out their own subtle space in sound, hanging together, but each occupying a different range of tonal color. The tracks are relatively longish, and the pair dart around each other nicely on tracks like "All The Things You Are", "Out Of Nowhere", "Blight Of The Fumble Bee", and "Two Of A Mind".  © 1996-2021, Dusty Groove, Inc.

Mr. Rhythm
RCA/Fresh Sound (Spain), 1956. Used
CD...$14.99
A long overdue classic from Count Basie's excellent 50s guitarist! Freddie was one of the strongest single-line players of the 50s – coming to prominence in the years before Grant Green and Wes Montgomery completely transformed jazz guitar, but never getting as much chance as those greats to ... CD

Sonny Meets Hawk!
RCA, 1963. Used
CD...$6.99
A startling meeting of two generations of tenor sax – recorded during one of Sonny Rollins' best periods on record, but featuring some even more amazing work from Coleman Hawkins! The album's proof that in his later years, Hawkins was a modernist who could match wits with the best players of ... CD