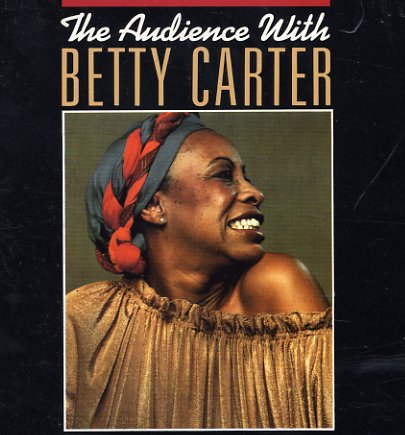 A brilliant live set by Betty Carter – originally issued on her own Bet-Car label in 1980, and a perfect summation of the underground soul that was bubbling through her work in the 70s! The Betty you hear here is way different than the Betty of earlier years – freer, more soulful, working in an unfettered setting that lets her take off on piano and vocals, working in a mode that's got a modal vibrant quality unmatched by most other singers! The album includes a great version of "Open The Door", a 25 minute reading of the landmark tune "Sounds", and the tracks "Tight", "Fake", "So", "My Favorite Things", "Caribbean Sun", and "I Think I Got It Now".  © 1996-2022, Dusty Groove, Inc.
(Out of print.)

Modern Sound Of Betty Carter (Japanese paper sleeve edition)
ABC (Japan), 1960. Used
CD...$22.99
Beautiful early material from Betty – recorded with large group arrangements by Richard Wess, and a nicely swinging, easily jazzy feel! The record is one of Carter's more obscure sessions, and it's one of the few from the old days to really capture her jazzy vocals well in a large group ... CD

I Can't Help It
Impulse, Late 50s. Used
CD...$4.99
A great set of rare early material by Betty Carter – featuring 24 tracks from the early days of her career! The set features one album Betty Recorded for the Peacock label, with hip arrangements by Gigi Gryce and Melba Liston, and one that she recorded for ABC, with more mainstream ... CD