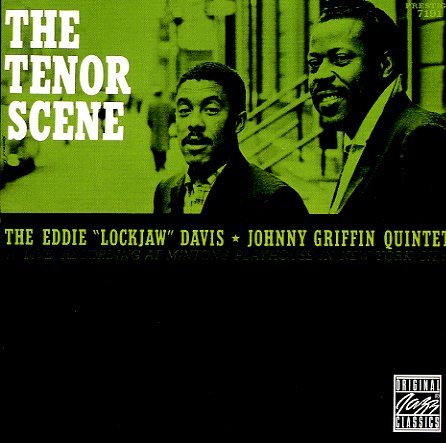 Lockjaw and Griff were a mighty team together – and their records from the 60s cook with incredible intensity. This great set was recorded at Minton's Playhouse in Harlem, on January 6, 1961 – as part of a marathon live session that was a big seller for Prestige. The group's incredible – a mixture of hardbop and moderism that's unstoppable – and all tracks are long, all with incredible two-tenor solo sections, plus some nice soulful piano from Junior Mance. Titles include "Bingo Domingo", "Straight No Chaser", "I'll Remember April", and "Light & Lovely".  © 1996-2022, Dusty Groove, Inc.
(Out of print.)

Blues Up & Down/Griff & Lock
Milestone/Jazzland, 1960/1961. Used
CD...$14.99
During the early 60s, tenor giants Johnny Griffin and Eddie Lockjaw Davis teamed up to cut a series of monster LPs that are still defined today as some of the best examples ever of a twin tenor frontline! The records matched hardbop solo intensity with tight soul jazz grooving – and nobody ... CD