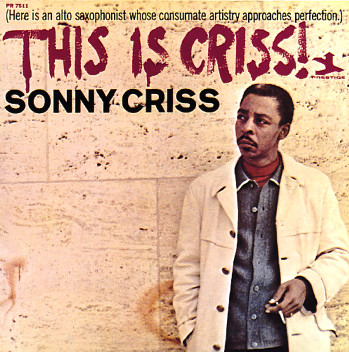 This Is Criss! (with bonus track)

A beautiful comeback LP recorded by LA alto genius Sonny Criss in the mid 60s – his first American session after a few years in France, and a few years off the scene back home! Sonny's time away had profound effects on his playing – and on this album, he returns transformed from the straight bop mode of his early days, into a mature sensitive artist in sound – capable of an amazing range of emotion, tone, and style! A number of the tracks in this set are pop tunes or standards – like "Black Coffee", "Days Of Wine & Roses", and "When Sunny Gets Blue" – but Criss plays them with a style that transforms them into something completely new, with a lyricism and emotional edge that extends well beyond the original structure of the song. Other tracks include "Steve's Blues", "Greasy", and "Sunrise Sunset" – and the CD features the bonus track "Love For Sale".  © 1996-2022, Dusty Groove, Inc.