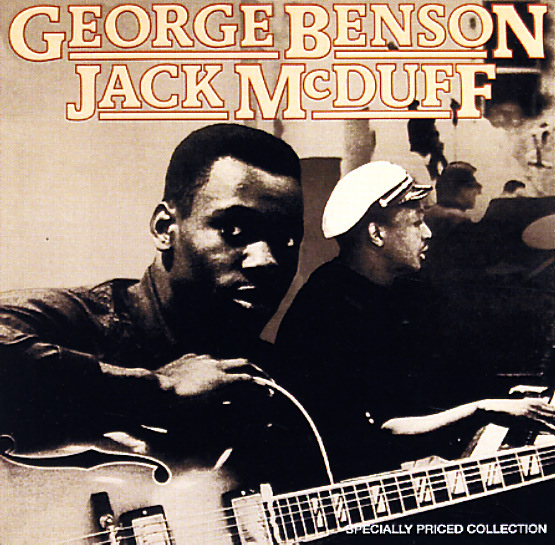 A double-length package of organ/guitar greatness – and a set that features key 60s work by Hammond hero Jack McDuff and guitarist George Benson! First up is The New Boss Guitar Of George Benson – the first album ever cut by Benson as a leader, a cooker of a soul jazz set, recorded back when George was the guitarist in Jack McDuff's classic 60s quartet! The album's almost a McDuff Quartet one – since Jack's on Hammond and Red Holloway is on tenor – but the group's slightly different too, with the surprising additions of Montego Joe on drums, and Ronnie Boykins on bass! Benson's guitar is amazing throughout – sharp-edged and played with a tightness that's quite different than most of his later work – and titles include "Shadow Dancers", "The Sweet Alice Blues", "Just Another Sunday", "Easy Living", and "Rock A Bye". Next up is Hot Barbeque – one of our all-time favorite albums from Brother Jack McDuff! The combo here is great – with a young George Benson hard-wailing on guitar, cutting lines so fast and furious it's hard to believe – especially if you only know his later work. The legendary Joe Dukes is on drums – dancing all over the place under Brother Jack's great groovy solos – and Red Holloway completes the group on tenor sax! The title track's got a rare vocal refrain – with Jack shouting out "Hot Barbeque" over the organ – and other cuts include "Briar Patch", "Hippy Dip", "601 1/2 North Poplar", and "The Three Day Thang".  © 1996-2022, Dusty Groove, Inc.
(Cover has light wear and partially split top seams.)

Soul Sister
Prestige, 1960. Near Mint-
LP...$7.99
Shirley Scott gets some mighty cool help here from vibist Lem Winchester – a player whose tones always make a session worth checking out! Lem's got a nicely punctuated feel to his vibes on the record – a tight, short punch that works beautifully alongside Scott's fluid Hammond lines ... LP, Vinyl record album