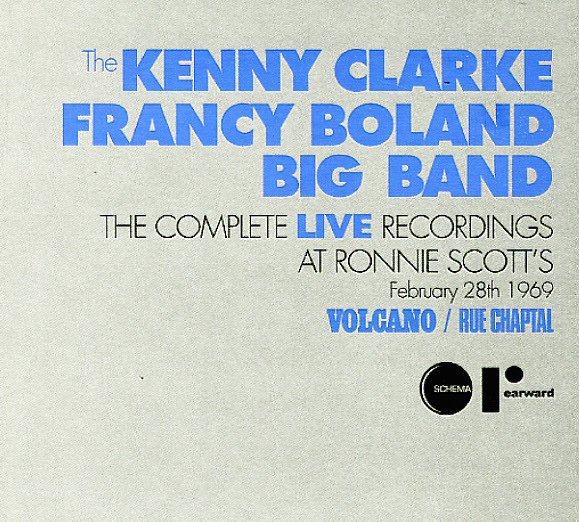 A large group in a small club – the legendary Clarke Boland Big Band, playing at the home turf of one of their key members – tenorist Ronnie Scott! The set features a very legendary performance by the ensemble – a crack lineup that's easily one of the best ever sported by the CBBB – perfectly mixing American rhythms, and a trans-Atlantic lineup of soloists – all tied together with just the sort of rich arrangements that make the group so great! Things groove right from the get-go – thanks to a rhythm lineup that features Kenny Clarke on drums, and Francy Boland on piano – plus bassist Ron Matthewson, sitting in for the usual Jimmy Woode. The horn players really send things off, though – tight trumpets from Benny Bailey, Idrees Sulieman, and Dusko Goykovich; bold trombones from Ake Persson and Nat Peck; and some searing reed lines from Johnny Griffin and Ronnie Scott on tenor, Derek Humble on alto, Sahib Shihab on baritone, and Tony Coe on both tenor and clarinet. This CD features both the first and second sets at Scotts by the group – albums titled Volcano and Rue Chaptal – with titles that include "Volcano", "Griff's Groove", "Now Hear My Meanin", "Box 703 Washington DC", "Thence We Issued Out Again to See the Stars", "Rue Chaptal", "I Don't Want Nothin From Nobody & I Ain't Giving Nothin Away", "Sax No End", "Minor Blues", and "The Girl & The Turk".  © 1996-2022, Dusty Groove, Inc.